I will be blogging my cancer journey here for anyone that would like to follow a day by day of what's happening.

I will be blogging my cancer journey here for anyone that would like to follow a day by day of what's happening. 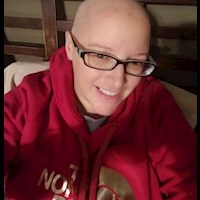 I am not very good at this blogging thing everyday!

So like I said I wanted to update this daily BUT that hasn't happened.  I do have lots to update about though and it's mostly good news so that's a good thing!!

1.  Scan results came back and everything is looking good!  initial tumor site has shrunk down quite a bit and most of the lung nodules remained the same.  There was one that shrunk a little but Dr Litton is still on the fence as to whether that one is cancer or not.  He suggested it could just have been inflammation in the first CT scan that has now resolved.  They are all under the 1cm mark that they look at as being cancerous and the radiologist has read the scans as not metastic disease so we will go with that for now.  The prayers are helping so much!!

2.  We will not being doing radiation at this time but rather will opt for another surgery on my bum to go in and remove any unhealthy tissue.   When they originally took the tumor out they thought it was a sebaceous cyst and not cancer so they did not remove the tumor with negative margins.  Dr Miles, Dr Litton, and Dr Canon felt the best way to cure this nasty stuff from my body is to go in for another surgery.  Now this does not mean we won't be doing radiation later down the road but it also gives us another option if we need it.  (which is always a good thing with this aggressive cancer).

3.  I finished my 7th round of chemo and am officially half way done!  Woohoo!!!  I will be taking a couple of weeks off to heal from my surgery but then it will be onward and upward to push through this last half and back to a normal life.  I am so ready to move on from this but staying focused as this is the fight I need to win right now.

4.  My surgery is scheduled for February 20th.  She has suggested I should plan on spending 1 night in the hospital to keep an eye on things and make sure all is well.  So I will be relaxing and recovering from this round of chemo for the next 2 weeks then surgery, then another 2 weeks of recovery.  We will then proceed with round 8.

My 2 day weeks of chemo is called VDC week (vincristine, doxirubicin, and cytoxin)  These rounds are short rounds at the infusion center but the drugs are a bit harder on my body and my blood counts so recovery time isn't as fun BUT I can say my nausea has not been bad through any of this and that was my biggest fear going in.  Other things haven't been fun but we push through and get through it.

Today I am thankful for my team of doctors!