This site was created for love and support to Kelly, who is going through a second battle with breast cancer within 3 years. Prayers, messages, pictures, and cursing are [...] read more

This site was created for love and support to Kelly, who is going through a second battle with breast cancer within 3 years. Prayers, messages, pictures, and cursing are all encouraged and allowed. The best way to get through a struggle is laughter. You might see some crazy and questionable stuff. T[...] read more 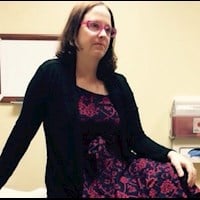 I don't know how else to describe it. I am on weekly treatments and instead of having a good couple of weeks like last time I have maybe a good day or so then I'm right back down where I was before. I went to the oncologist on Friday expecting normal treatment. My white blood count was low and I showed signs of infection so I had an IV antibiotic and neupogen shots. The good news is the shots were not neulasta which made me beyond sick and in a great amount if pain. Luckily, neupogen is not nearly as bad!! It does knock you down physically but the pain is not as intense. Here's hoping to better counts on Wednesday. To the world, I miss you!! I haven't been active in weeks. Friends offer to bring me food but either I don't feel like eating a bunch or I am restricted in my diet. Even doing the dishes wears me out at times. Thank God for our age of technology. Netflix has more than I could ask for and thanks to my trusty little tablet, I can keep up with everyone. I don't fight this fight alone. I look to forums to get advice and I see women who have been through this three or four times. Some were at Stage 4 where I have been lucky enough to be at a Stage 2 or less each time. I think of my sistas in battle, one on a clinical trial and one with inflammatory breast cancer which will require a lifetime of treatment. Each of these women also have a daughter under 4. Right now I am suffering but must not forget my blessings as well. Taylor is 14 and one of the most beautiful hearts I know. Yesterday, he noticed I was a bit slow walking in the kitchen and he said, "Here Mom, let me help you." He then pulled my arm around his shoulders and helped me into the living room. I wasn't that weak but it was a moment that I was too stunned to end. To see your child show compassion and love like that is something every parent wishes for as they grow. He hugs me often saying, "It's going to be okay, mom." And Jason. Oh, my God Jason. He has been there for 1 and 2. He assures the house is stocked with whatever I need and if I don't have it he runs out to get it no matter time or day. He hugs, he loves, he's loyal like I've never seen. I think about all I have been though and all I have lost. He's one my rewards. :0) I am halfway though this mess and while I don't see the light yet, it's starting to feel warmer in the tunnel. This life is a gift. Getting up every morning and going to work is a gift. Being able to enjoy your favorite food, take a walk in the park on a sunny day, going to a concert or play (dammit, Book of Mormon just had to be in town NOW), drinking a glass of wine, or even taking a trip is a gift. And when all this shit is said and done, I will be doing all of that. Many times. It will also be springtime which is the season when I'm truly alive. Bring it on, life. Bring. It. On.

Help Kelly with a financial donation.