We are going to do updates when we want to about Everly both to keep everyone updated and so she can look back on this in a few years.

We are going to do updates when we want to about Everly both to keep everyone updated and so she can look back on this in a few years. 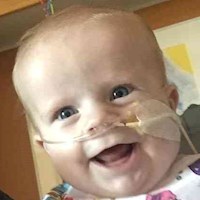 Its been a while

I'm not sure if I'll sleep tonight, got a lot of stuff rolling through my head so figured its been so long since I've written anything here I could do this. Everly has been doing great, doctors right now are not planning on doing any surgeries on her again this year so long as nothing changes....but that could change still. In the next 4 weeks, Everly has 3 appointments, one with neuro, one with pulmonology to see what they thing about her airways, and the 3rd is with cardiology with her cath doctor, Curzon.

2 weeks ago Everly had 3 doses of anesthesia in a single week, 2 for MRI's and the 3rd for a cath. The 1st MRI was on her heart, and there was a disagreement between her heart surgeon Hammel and her cath doctor Curzon- Curzon thought they were looking at a possible clot, and Hammel thought it was scar tissue. Either way, they wanted to go in to make sure it wasnt a clot, and in the end it wasn't a clot, and the cath went fine, he just did some minor ballooning. The last MRI was done on her brain, as we're now starting to address some other issues.

She still isn't walking, and while Everly is expected to be somewhat behind on things such as walking and talking, she shouldn't be this behind. She's really shaky, and Erin and I have noticed (especially in the morning) that Everly can be quite uh....trembly. If she reaches up to grab something we are handing her, her hand has a slight tremble to it. So while her legs being shaky could be understandable since they are bearing weight, we can't ignore the signs shes giving us that there may be more to this than we know right now. Neuro is scheduling appointments for November at the earliest, but they moved us up to 2 weeks from now, but we were told its not a "she's in trouble this is super urgent". So what are we supposed to take from that?? We never know anything until actually talking to the doctors, its frustrating to be certain but we've gotten used to the hurry up and wait game- for the most part.

I know we're nervous, I'm not sure if this will quickly snowball into something big or not, but I certainly want to know whats holding her down. I start a new job monday, and I'll likely be on the road, so Erin will be dealing with more with the kids temporarily during the week. Everly seems to be in a pretty good spot right now medically speaking, so we thought now would be an opportune time for me to go chase some money with 60+ hour weeks and save up so we can get back out on our own again. Erin and I are very grateful that Pat opened her house to us and let us move in with her, I know Hudson loves it!! But we dont want to take over her house longer than we have to, so we'll have to wait and see what the near future holds for Everly in that regard.

Everly, despite everything she's been through is a mostly happy and always smiling baby. She's gotten really fast crawling, since thats her mode of preferred transportation right now! I say she's mostly happy, because we've taken the binky away except for when she's sleeping and wow....this little baby can have some serious attitude issues! Hudson can be kind of mean to her occasionally, but then he'll walk up to her and ask if she wants the last chip that he was eating- it's really cute and makes me really proud of him. I wish Andy was here to watch them together- I think about him a lot, he was a positive influence in my life, and made me a better person. Its difficult to think that he's been gone almost 5 years. We hung out a lot, and I really wished he was here to just talk about stuff. Its been probably a year or so, but I had a dream about him, and he was just talking at a Harvey christmas playing cards. It wasn't a significant dream by any stretch of the imagination, but it kinda fucking killed. Nightmares suck, but you wake up from them and know it wasn't real. Good dreams, on the other hand are unbearable- they take you to the pinnacle of your desires, and when you wake up, hurl you back into the abyss of life.

Does uh...does this need a better ending? Probably

But I'm gonna go change the oil in the truck