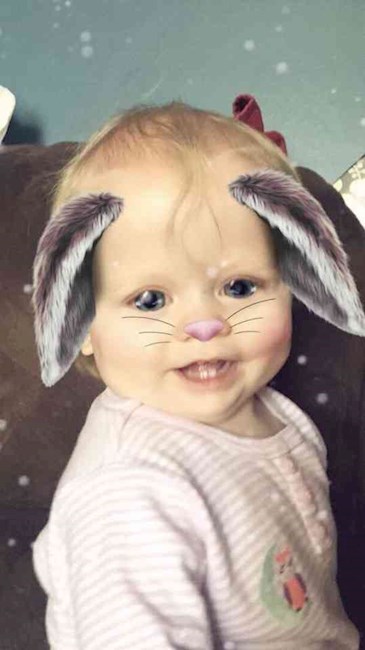 It’s been so long since our last update, I feel like I should post something…. Everly is doing well in general. She’s making her docs a little nervous in the sense that her lungs are taking a while to bounce back from from her RSV infection she had at the end of January. She is still coughing off and on and you can almost always hear her breathing from a few feet away. She seems to be feeling well though- always smiling and taking everything in stride. She’s been so busy lately- she’s hard to keep up with. She’s beginning to pull up on things and working on standing a little more on her own- her legs are so weak and she’s pretty wobbly. I think I have a heart attack every time I see her pulling herself up now! Yesterday morning I walked into her room and she was standing in the crib fake crying for me to come get her- so damn cute! Needless to say, her crib is now at its lowest setting and I’m wondering how long it’ll be until she’s ready to move into a toddler bed- she’s growing up so fast…

Ev’s cath last week was cancelled because the anesthesiologist wasn’t convinced that she would come off the vent afterward. Very frustrating as a parent, mostly because I had rearranged my shifts at work to be with Ev the rest of the week. Now to work on trading off for her cath again the end of the month- ugh! I can’t say I wasn’t partially relieved to have the cath cancelled though. I would much rather take my baby home than watch her recover from another surgery. Don’t get me wrong, I would take a cath any day over another open heart surgery but the bedrest and bleeding (especially last time) are killer. Ask any mom of a busy 15 month old how to keep them completely still with their legs straight for 6 hours and they’ll tell you it’s impossible. I half-heartedly joke with the nurses that we need medicated to get through bedrest and they usually think I’m joking but I’m not really- I want her to sleep through it! Last time she was so mad when she woke up she would cry and her neck incision would bleed, give meds, sleep, wake and cry, bleed, meds, sleep--- over and over until finally they pulled out the big guns to sedate her again. I’m not looking forward to doing it again…. But we will 3/30, no matter how she sounds- Cardio is admant they can’t wait as long as they did this fall. Her doc is pretty anxious to get back in and see what more he can do to open up her pulmonary arteries and keep collateral vessels that have been forming in check.

As a result of her cruddy sounding lungs we will now be seeing a pulmonologist also. We met one in the hospital last week and see a different one in clinic tomorrow. They are trying steroids orally and inhalers with Everly to see if they can get her lungs a little healthier. If she hasn’t responded to those treatments when we go back in tomorrow, they will plan to “scope her” (bronchoscopy?) 3/30 while she is under anesthesia for her heart cath. I’m not sure what to think about her lungs- honestly, I’m trying not to- the nurse in me is always thinking worst case scenarios. I can’t help but assume the worst- like this is signs of heart failure already and that she won’t be healthy enough to have her 3rd stage surgery and we’ll run out of options for her. Ugh! I can’t do that… we’ll figure out what’s going on and fix it hopefully.

Ev’s oxygen saturations are all over the place lately, sometimes crappy 68-70 and other times better 78-80. We haven’t really seen much of the 80’s in a couple months though… She does seem to like her Albuterol inhaler when she has coughing fits or is struggling to catch her breath after she plays to hard or crawls too far…

We saw the Development clinic at Children’s Monday. It’s designed to watch chronically ill kiddos from a developmental stand point and recommend services to try to help them stay on track. They are worried that Everly isn’t talking, she does say mom and dad but that’s all- not worried enough to do anything but just watch her at this point. We are going to start going in for outpatient physical therapy though as she isn’t crawling on all fours (she prefers to army crawl using her arm muscles) or close at all to walking yet. I’m hoping if we can strengthen her core and leg muscles a little she’ll catch up quickly. She so badly wants to be able to keep up with her brother and get to the toys he doesn’t want to share with her. He’s good at moving onto the couch or bed or any higher ground to keep things away from her but she’s starting to try to follow more.

We also have so many appointments to juggle in the next few weeks. Cath, cardio, pulm, genetics, pediatrician, PT, and EDN home visits- it’s almost too much… Ugh! I’m so tired and it’s so hard to work around all these appointments. For any of my Short Stay ladies reading this, from the bottom of my heart thank you! I so appreciate all of the willingness to help me lately and the flexibility you have shown to work my later shifts for me. If it wasn’t for my co-workers help I would have many more ill calls and would probably have been fired by now. It’s so nice to be a part of our work family! You guys are awesome!!!

Thank you all for your continued support and encouragement. Donnie will be having a minor outpatient surgery in the next month sometime and then he’ll be trying to go back to work full-time. I’m hoping he will find an employer understanding of our situation and willing to give him days off when we need. It’s hard for us to send Ev to a sitter as she’s been so prone to getting sick this winter and in and out of the hospital. I also missed sometime from work last month as I was in the hospital for a kidney infection. It’s just been easier for Donnie to not work full-time while we’ve been trying to push through cold and flu season and my own illness…. I hope we can figure out a way for him to have a full-time income again soon… bills don’t pay themselves unfortunately… That’s enough complaining though… more to come with Evy in the next couple weeks, I’ll keep you posted as I can.