This site is a way for family, friends, and loved ones of Christie, Micah, and Baby Gera to check in and see day to day how they are all doing.

This site is a way for family, friends, and loved ones of Christie, Micah, and Baby Gera to check in and see day to day how they are all doing. 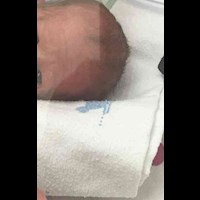 It has been a long time since I posted on this journal. I found that while we were "waiting for grass to grow", there really wasn't much to post about.

Gera got transferred on May 30th from the NICU at Women and Infants to a regular floor at Hasbro Children's Hospital while we awaited for surgery. We waited, and waited, and waited. Until I made a decision that I will not regret. We decided that it would be in Gera's best interest to transfer to Boston Children's Hospital. This was an extremely tough decision for us to make due to the fact that we have been with a specific set of doctors from the very beginning.

On Friday, Gera will be undergoing his surgery to connect his esophagus. This has been long awaited since he was born. I know there are a lot of questions people may ask and seeing as some people may be reading this and maybe didn't read the previous posts, I will put all the questions I continuously get on a daily basis and answer them so everyone can see.

Gera was born very premature at 29 weeks weighing 2.8 pounds. That unfortunetly wasn't the biggest hurdle. He was born with an extremely rare birth defect called Pure Esophageal Atresia. This is when your esophagus ends in a blind pouch on the top and bottom parts, therefore not allowing you to swallow and eat- which is essential to live. Twenty to thirty years ago, these kids would not live. Gera eats by a G-Tube. It is a little "button" that was surgically placed when he was two days old into his stomach. There is a pump that pushes through his formula and in the early months, breast milk. Once he learns how to eat 100% orally after he has his surgery and he doesn't use it for at least three months, we can remove this tube completely.

What is that tube in his nose?

You know how I just said his esophagus ends in a blind pouch? When you swallow your own spit (which you do 24 hours a day), where does it go? Well, it goes down your esophagus into your stomach. Where do you think Gera's goes? Nowhere. So, he needs continuous suction from a wall, hooked up to a little tube that is inserted into his nose- into his dead end pouch to suck out all of his saliva. If he didn't have this, he would drown in his own secretions.

Why did it take so long for surgery?

Because Gera was born with one of the most rarest forms of Esophageal Atresia, it is one of the ones with the longest wait.  It is "Long Gap" which means we had to wait for the two ends of the pieces of esophagus to get close enough together to finally repair him/connect him. This requires weight gain....he has done exceptionally well in this category as he now weighs well over thirteen pounds.

Is this birth defect genetic?

Thankfully, no. This birth defect is unfortunetly one of those "just your luck" type of things. IF we were to ever have another child, they are not at increased odds of having the same birth defect. Also- No, I did not do anything wrong during my pregnancy that may have caused this. This occurred when I was 8 weeks pregnant (which we obviously didn't know). I actually was a nut during my pregnancy. I made sure I didn't do anything I shouldn't do because I did not want to jeopardize my very rare chance of being able to finally have a child.

How long is recovery?

Once we get transferred to Boston on Monday and Gera has his surgery on Friday, I am being optimistic by saying Gera will be home by the end of August. I am not going to go into grave detail as far as how his surgery will work. It is a 10-15 hour surgery but, it will be done by the best of the best.

How do you do it?

I feel as though I get this question the most. How do I do it? How do I deal with having a premature baby (which is scary enough to begin with) but then also throw on top of it a premature baby with a serious birth defect. Well, my answer is.....when you are in the thick of it- you don't have a choice. When you see your child fighting for his life, you fight with him. You see that he is strong and ready to face this crazy world- then you fight this crazy world with him.

When the NICU doctor came up into my room not even 24 hours after having an emergency cesarean section of a premature baby, only to tell me he has a serious birth defect....the first thing in my mind was "Ok, he is going to die." And unfortunetly, I was emotionless. I felt all my fight was gone. I had nothing left. But, the doctor then went over the prognosis with me and I felt much better. I knew that I had to fight with this boy- so, I did.

Gera is going to live a long and happy life just like all of us. Everyone tells me and I know it's true- "he will never remember any of this." He won't, but we certainly will. Gera will be just like any other kid....he may have some struggles as a child with colds and/or chewing and eating slower than other kids but he will be a typical child. So, the answer is.....the prognosis is great. It may have been a long road for the past five months so far, but we have made it and I know everything will turn out fine.