At 20 weeks, Emmy was diagnosed with Heterotaxy and Dextrocardia with Situs Inversus. We invite you to walk along side of us as we set forth on this journey that The Lord[...] read more

At 20 weeks, Emmy was diagnosed with Heterotaxy and Dextrocardia with Situs Inversus. We invite you to walk along side of us as we set forth on this journey that The Lord has set before us! 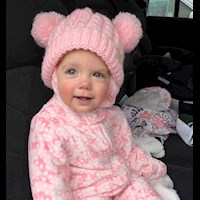 It’s safe to say that the last week and a half has been an absolute whirlwind! We are back home in Austin! With all of the uncertainty surrounding COVID-19, we wanted to get home as quickly as possible. Early afternoon last Tuesday we got the blessing from Emmy’s amazing cardiologists at BCH, Dr. Beroukhim and Dr. Harrison, to jump on a plane and head home that night (with the promise that we would obsessively Lysol our area of the plane and be in the pediatrician’s office first thing Wednesday morning for a check-up). We are so grateful that we acted fast and got home. From what we’ve heard it sounds like Boston is pretty much completely shut down at this point.

Emmy is doing fantastic! She developed a cold while in the ICU, but she is such a trooper and is her normal, happy self! Her BCH team couldn’t be happier with how she is doing! They continue to be blown away by how quickly she has recovered. At this point, her heart is fully repaired, praise God! Emmy sees Dr. Stewart (our Austin cardiologist) tomorrow for a follow-up.

We are in close contact with Emmy’s Austin and Boston heart teams during this time of uncertainty regarding COVID-19. While the virus has not seemed to affect many kids, per the CDC, it is the most dangerous for the elderly and anyone with heart disease. One of Emmy’s cardiologists told us that “she isn't really at an increased risk of catching the virus itself, but she definitely does carry a bigger risk than the average kid if she were to catch it, in terms of more severe symptoms and complications.” Per the doctors’ orders, we are under a fairly strict quarantine until further notice.

We truly cannot thank everyone enough for the outpouring of prayer, love, support and care over the past month. We could not have made it through our time in Boston without all of the kind texts, phone calls, prayers, and various other ways through which people lifted us up. We are eternally grateful that God led us to BCH. It feels inadequate to just say “thank you” to the team of surgeons, doctors, nurses and other medical staff who cared for Emmy, and us, while we were there. These people were the hands and feet of God, through which Emmy’s life was saved and forever changed...and through which John and I have been forever changed. God did things that we haven’t even started to unpack and process. Let’s just say that He moved...and He moved again...and then He moved some more. The day before we came home, we had the chance to stop by Dr. Emani’s office to give him a hug and attempt to express the depth of our gratitude for everything he has done. As always, he was extremely humble and would not take any credit. His response was just this - “It takes a team, and it’s thanks to the prayers of the people.” Maybe someday I’ll be able to put it into words, but for now, all I can say is that we have never felt more humbled, grateful and thankful.❤️