Updates and Progress of James Melton

On December 12, 2017 James had a minor stroke and was transferred to St. David's in Austin. The next morning James had a massive stroke that affected the left side of his[...] read more

On December 12, 2017 James had a minor stroke and was transferred to St. David's in Austin. The next morning James had a massive stroke that affected the left side of his brain. This left him paralyzed on the right side and affected his ability to speak. On Thursday December 14th his brain began to[...] read more 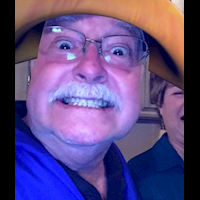 This New Year is bringing new changes.  Dad is definitely a fighter.  New Years Day was a little slow at the hospital as they were running with a skeleton crew.

Dad was approved to be moved to Texas Neuro Rehab in Austin.  He was also using the remote to change the channel on the TV.  Still a pretty slow day, but every day he gets a little better.

They performed the TEE test to see if it was his heart that caused the stroke.  I am happy to report that it was not.  The swelling on his left side has began to go down and you can now see the indention from where his skull has been removed, which is great news.  We decide to test dad a little on our own and had him write on a dry erase board.  Keep in mind he is having to use his left hand to write, and he is right handed.  He was able to copy a circle, and X, 3 straight lines, and a J. The second time we had him to a circle and an X he drew 2 circles, but started laughing.  He was just messing with us.  When he has a deep laugh he makes noises and can actually hear him.  He is still able to feel on his right side, but still no movement.

Dad was supposed to be breaking out of the hospital to move to rehab, but his nurse noticed a little swelling above his left ear.  They took him back for a CT and he had another bleed in the same area.  They are stopping all aspirin and blood thinners for 4 weeks, and will then put him back on aspirin.  Due to this they have postponed his release.

Dad was finally transported to the rehab facility with no changes in the CT.  The day was full of paperwork and getting settled.

PT and OT got dad into a chair and helped him stand with a machine.  He then sat in a wheel chair for about 30-40 minutes.  After all that activity he was pooped and a little nauseas.  This place is definitely going to push him, and we will see that hard working stubbornness pay off.

Again, thank you everyone for your continued love, prayers, and support.