Jessica is 21 and almost 12 years post traumatic brain injury. She has come so far but is still so far from.where she wants to be. I share her journey to help spread a[...] read more

Jessica is 21 and almost 12 years post traumatic brain injury. She has come so far but is still so far from.where she wants to be. I share her journey to help spread awareness and to inspire and help others. We also welcome encouragement, prayers,advice and suggrstions. 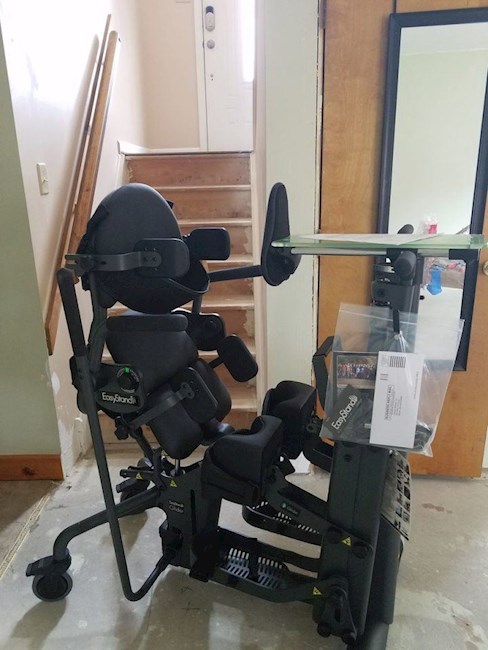 The last words her orthopedic said to us before she aged out of Dupont was if I could only choose one thing to do with her each day that it should be standing. He could not stress enough how with out standing that her body will deteriorate causing many set backs and medical problem in the years ahead.

There are so many benifets to standing and that is why this is probably one of the most important pieces of equipment that she can own.

We are so blessed to have one for home but I am stressing out a bit because it it much bigger than her pediatric one was.......My plan was to keep it in the kitchen (her favorite room to be in) so she could stand while I made dinner but it is just too big for the kitchen. I tried her room but once again too big....So it looks like we are on to plan B. It looks like once our remodel is complete we will be spending a portion of each day downstairs standing and while we are down there we mine well once again start utilizing our mat table. Who knows maybe she will make some leaps in that form of strength.

I have to admit that my first thought was too big, send it back but then I remembered how important this is for continued healing even if that just means maintaining. Hopefully we will see progress.