Wow!...was I ever wrong about thinking that Julie had turned the corner on her shingles. Since my last post, the pain associated with her condition has gotten worse, and she's been in constant excruciating pain. We've tried everything to give her some relief, including pain meds, but nothing seems to be effective in reducing the pain. The only relief she gets is when the pain meds put her to sleep.[...]

We hope that everyone had a very enjoyable Christmas. Because of her compromised immune system, Julie recently developed a case of shingles. Shingles are painful under normal conditions, but with her chemo-sensitive skin, she has been in some pretty severe pain. She is still hurting, but there has been a bit of improvement, and we're hoping that she's turned the corner and is on the road to recovery from this issue. If there are no complications, the current plan is for us to return to Houston New Years week for a scan and her next chemo treatment. We are hoping that her white blood cell count will be high enough for her to receive the treatment on Thursday, January 4th.[...]

For those that were wondering, Julie was able to get her second treatment under the new treatment plan yesterday. Now we wait for another three weeks...[...]

Julie's chemotherapy treatment scheduled for last week was delayed to today, due to a low white blood cell count. Unfortunately, her blood tests today showed that her count was better, but not yet fully recovered, and her platelet count was also low. She received an injection today to help get her counts up, and her treatment was rescheduled to this Thursday. Hopefully, her counts will be good enough then for her treatment. Always something complicating matters...[...]

Julie had her next chemo treatment scheduled for today, December 5th. Unfortunately, her blood tests showed that her white blood cell count was too low for her body to be able to handle another treatment right now. They are delaying the treatment for a week. That should give her body time to rebuild her blood count...we certainly hope so. We don't like the delay because it will delay the determination if her treatments are being effective, but it's very dangerous to apply chemo with a low count, so there is no choice. We'll have to wait another two or three weeks to get some definitive results. A long wait...[...]

I've had a couple of inquires about Julie, so I'll post a short note on her current progress. She is now on her new chemo regimen, but hasn't been on it long enough yet to determine if it is being effective. We hope to learn that in a week or two. She is having a difficult time with the chemo side effects, but she's doing her best to hang in there like a good soldier. She is scheduled for her next treatment the first of next week.[...]

It has been brought to my attention that I may have caused a tad of confusion with my most recent journal entries. On Nov. 15, I posted three back-to-back entries, the last being of the new baby. To see all three entries, you must view previous entries back to the one titled "Bump in the Road". Sorry if that was not clear.[...]

Correction to "A Happy Moment"... 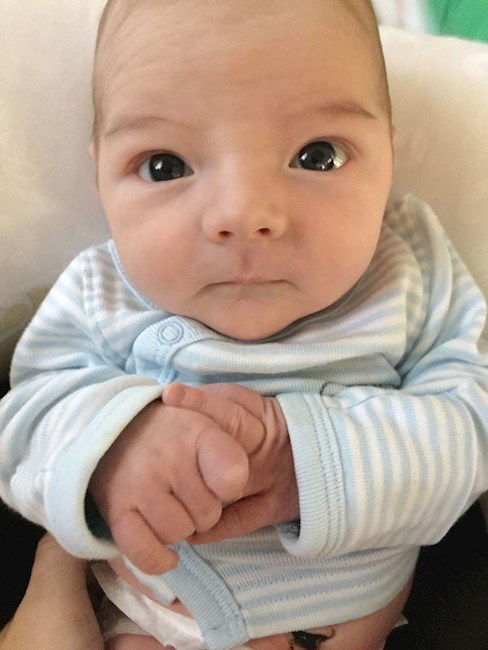 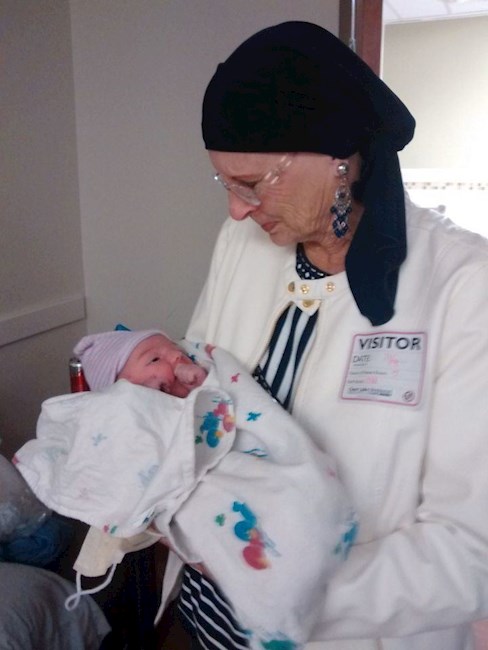 I forgot to add, here's some good news. Julie holding her new great-great grandson. She was happy, happy, happy![...]

Bumps in the Road

My apologies for being remiss in posting Julie's progress lately, but we've experienced a few bumps in he road, and things have been a bit hectic for a while. Due to a bout of extreme weakness, we had to make another trip to the emergency room, where Julie received a unit of blood to get her back on her feet. And we've had continuous doctors' appointments for the last couple of weeks. In my last post I had reported that Julie's latest scan had shown some shrinkage in her tumor, and we had hoped that her following treatments would achieve the same results. Unfortunately, that did not happen. Her following scan showed that the tumor was no longer shrinking, demonstrating that the treatments were no longer being effective. Molecular profiling confirmed that her cancer is chemo-insensitive, which meant that we could not continue the treatment plan that we had mapped out. We have decided to to enter a relatively new trial that will use a different combination of drugs to treat the cancer. The treatments will be every three weeks, with daily oral meds in between treatments, and her being closely monitored during the treatment plan. She had the first of four treatments yesterday, so we've stayed in town today to be sure that she did not experience any unexpected side effects (she hasn't). Not having been home in weeks, we plan to head that way tomorrow. It will be good to get back into our own house, and get caught up on the things that  need to be done there.[...]