We're using this journal to keep family and friends updated in one place as Dave goes through treatment for liver cancer. Most (if not all) entries will be written by W[...] read more

We're using this journal to keep family and friends updated in one place as Dave goes through treatment for liver cancer. Most (if not all) entries will be written by Wendy but Dave may pop in here as well if I can convince him to! We appreciate your words of hope, support, and encouragement[...] read more 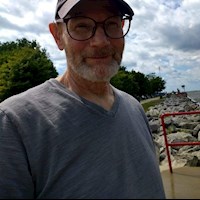 Yesterday Dave saw Dr. Saad for his monthly visit. He's graduated to a monthly doctor visit and labs instead of having to go every two weeks (that was a precaution when he first started on Stivarga). He also had his CT scan (done every 3 months) last week, so the doctor went over the results of that as well.

First off, the AFP tumor marker is now down to 156. That is fantastic -- every month lately it has been dropping. The tumor marker dropping does seem to correlate with the lesion/nodules shrinking as well, because the CT showed that his liver lesion shrunk by 2 cm and the lung nodules all shrunk as well; one of them is actually no longer measurable. (He also used to have a second, smaller liver lesion that popped up right before his radiation treatment in 2018. That hasn't been mentioned in a while so I think it's no longer there.) All of the other things on the CT scan -- kidneys, pancreas, lymph nodes, spleen, bones -- were fine.

His blood tests show good liver and kidney function; a small elevation still remains in his AST test (still lower than it used to be) and basically, it all looks good. The doctor was very pleased, all smiles, and our visit was short but sweet. Dave feels that he's really adjusting well to the Stivarga and he had nothing to report as far as problematic side effects. He is set to continue on his treatment regimen and he'll be seeing the nurse practitioner in March instead of the doctor.

As I type this, he's tearing the carpet off our stairs (where we discovered that EVERY tread was broken, so it's a wonder neither of us has tumbled down the stairs at some point!) and getting ready to replace the treads, risers and skirts. He's full of energy and piss and vinegar, this man! I love him so.

Thank you all for your continued good thoughts and keeping Dave in your prayers!