Following the story of Max & Miles Gable, their journey from being born at just 26 weeks after Miles water broke at just 17 weeks gestation, Max’s brain bleeds multiple b[...] read more

Following the story of Max & Miles Gable, their journey from being born at just 26 weeks after Miles water broke at just 17 weeks gestation, Max’s brain bleeds multiple brain surgeries, spending their first FIVE months in the nicu, cerebral palsy diagnosis’, and lets just face it the life of a stay-[...] read more 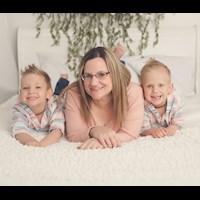 Ok, it's been an insane 5 days. Let me try to bring everyone up to speed because trying to respond to everyone via text and facebook messages about what has actually gone down via my phone is NOT an easy task. Monday night brought little to no sleep for Max and I. He cried most of the night. Something was not right. He did not bounce back from surgery 10 like he should, which is why we went back in for surgery 11 and after surgery 11...even worse. Come yesterday Greg and I were really terrified. He wasn't talking, his eyes were pretty much rolled in the back of his head. He couldn't even look at us. He was almost like in a vegetative state. I was starting to wonder if he had suffered more brain damage, or maybe even a stroke. We asked to talk to nuerosurgeon team. We voiced our concerns, asked if we could run some more testing to rule out if there could be anything else possibly wrong. The neurosurgeon agreed, we also discussed the possibility of another surgery. They did blood tests, a nasal swab, got a urine sample, etc. By early afternoon Max's nasal swab came back positive for noro rhino virus. So he went into isolation (meaning all staff that enters his room has to wear gowns and masks and he loses all privledges to leave his room to play and leave his room) :( However, this is NOT what would be causing how he was acting. (rhino virus is basically the common cold), and they were all very shocked he came back positive for it as he had NO symptoms (no cough, congestion, fever, anything!) They ordered another MRI (a more detailed one that takes 30 minutes) to see if they could get some better images of his brain to see if they had missed anything. After he was finished we were really scared because the ICU Dr who did the anestetic for it was very anxious about reachign nuero immedietly afterward, and made sure that we continued to not let Max eat or drink anything (a sign he may be headed back in for surgery soon). However when we got back up into Max's room and the Neuro PA came in to tell us the results she said there were really no changes shown in the imaging and asked what we'd like to do next. That Dr. Asadi was willing to do whatever we wanted. Max had been crying ALL day, starting around 3:30am, by this time it was later afternoon/evening. We were faced with a decision, do we go back into surgery not really knowing exactly what needs to be done. Knowing imaging has failed us in the past (like Saturday when the second shunt appeared fine so only the first was initally repaired, but then that night had to go back in and repair the second one?) Or do we continue to sit and wait. I was all for going back in. We had talked about possibly doing it earlier in the morning as the surgeon had brainstormed possible options for re-working Max's whole VERY complex shunt system. Re-wiring it essentially to make it less complex and easier to troubleshoot that (god forbid) there be another issue in the future. So that's what we decided. We CHOSE to go back in. They asked if we wanted to do it ASAP, or wanted to hold out until this morning (Wednesday), and that Dr Asadi was willing to do either. I said "I can't look at my baby like this anymore, I want it ASAP." Surgery was scheduled for 8:30, we were told it would last about an hour and a half, it ended up taking 4 hours. We didn't see Max until 1:30am. When the surgeon came out to us in the surgical waiting room smiling, my heart finally fell back out of my throat back into my chest where it belongs. He pulled us (myself, Greg and my dad) into the consult room to tell us how everything went, to show us the before and after images. He told us everything went perfectly. He removed the shunt in the lower 4th ventricle of Max's brain and replaced it and rerouted it into a better, more precise location with a longer catheter. The shunt Max had there was likely too small for him now and wasn't in the best (reaching) cavity to collect the fluid to drain. It was draining at a small dripping rate, when he put the new catheter in he said it was "flowing like a garden hose". The old catheter was working in a way that it was not draining until the fluid filled space had collected enough fluid to reach the holes in the catheter (pictures a straw with small holes down the length of it but there's no hole/holes at the very tip). But the new catherter is longer and reachs further into the fluid filled space that it is constantly draining excess fluid. (YES!) The new shunt is also a programmable shunt that can be adjusted externally by a very strong magnet. So if the flow rate is not enough, or too much the rate of flow can be adjusted without surgery. So, will this be the end of brain surgeries for Max? Will number 12 be our lucky number? We won't know but I'm going to count my blessings. He's doing a lot better today. He's not back to the Max we know yet but he IS talking now, albeit VERRRRYYY SLLLOOWWWLLYY, and not quite eating much yet. But I will take any small victory we get. We're still here at DeVos, but there's a chance we may be going home tomorrow (Thursday). A HUGE thank you again to everyone who had been here to visit, sent prayers, texts, messages, gift cards to the hospital for us, money, toys, balloons, everything! This boy sure is loved!