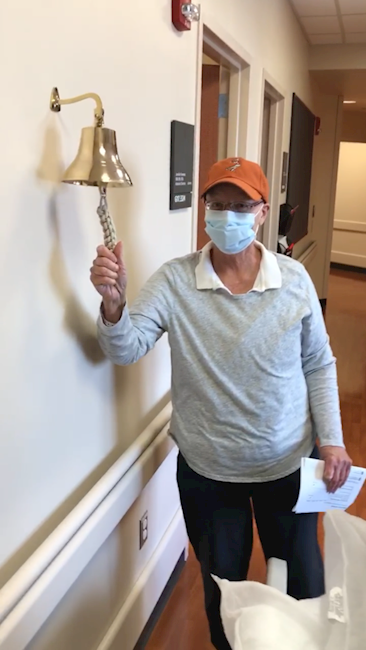 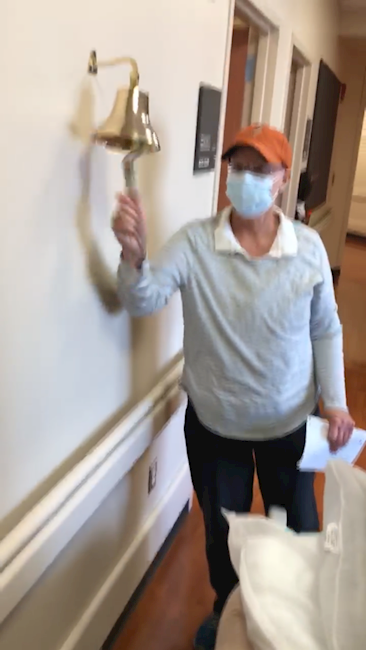 Dad steps out of the hospital room on the bone marrow stem cell transplant floor at MD Anderson and begins a daily quest — sleuthing out the location of one of the rolling coffee pots volunteers push around the hospital.

He peeks around corners, knowing all the spots and certain that he’ll find what he’s looking for.

He does. And he loads up his tiny cup with a splash of milk before heading back to see Mom.

As he nears the nurses station he notices something shiny and new.

But is it new? Or has it been there all along?

This is hospital life. You know it all. You see it all. Everything is exactly the way it has always been. Until it’s different.

But then different becomes a part of the new routine. The new normal.

But Dad isn’t losing his mind. Well. Maybe a little. But he’s definitely right about the bell.

They had just mounted it, the nurse says. It’s so new that they don’t even know what to do with it yet.

The papers are all signed. Mom and Dad’s signatures were easy.

They’ve been waiting days, weeks, even months to sign the papers.

To get out of the hospital.

Waitng for the doctor’s signature can take a long time sometimes.

But the process actually goes so fast on this day that Mom is in a wheelchair headed for the elevator before she even knows it.

Dad calls out to the nurse from the other end of the hall.

IT’S DISCHARGE DAY — TURN HER AROUND AND RING THAT BELL!

The bell rings out.

Not a handful of minutes later the van noses out into traffic and heads to the hotel.

There are no more grateful commuters on the roads of downtown Houston than these two.

Time to head back to the hospital for the daily checkup.

I know — but it’s so good to be out of the hospital and sleep through the night.

What do you think about some Chuy’s for lunch?

That’s a new normal I can get used to.

It’s been a very good week in Houston friends.