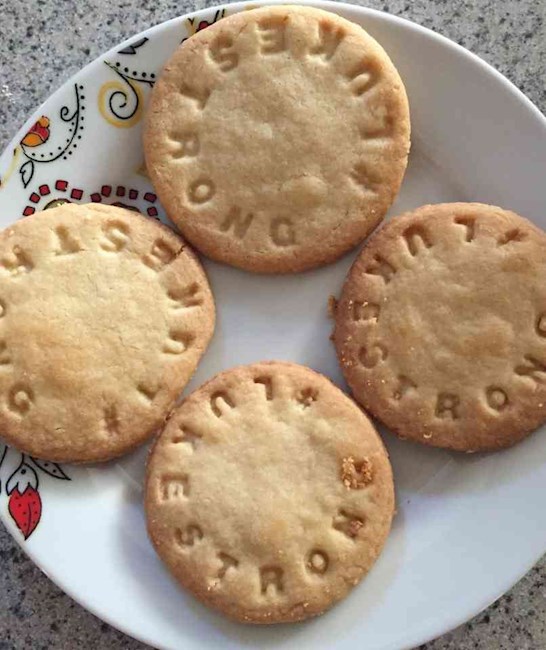 Luke had a good day yesterday. It was another beautiful fall day, and he and Penny made the most of it -- dog party in the morning plus two nice walks with friends later in the day.. His little body was exhausted by evening. He ran out of steam while making his apple cinnamon cardamom bread (inspired by Chef Kendra). He really wanted to do it "all own self" as he used to say, but asked me to take over near the end. I think something went wrong in the exchange. The texture wasn't quite right. He had planned to bring it to the hospital, but decided to leave it at home.

Some friends came over with a great care package for him after dinner, and then he gave in and went to bed early. He slept through the dog party this morning. I peeked in his room at 8 and decided to take Penny on my own. When we got home, I peeked in again. He was still asleep so I ran out to get a few things that he wanted for the hospital. Remember the days when the kids were babies and you'd want so badly for them to sleep in a little, but when they did, you'd worry that something was wrong? That's what I felt like this morning. I was really uncomfortable while I was out and checked on him as soon as I got home. He was fine -- just kind of grouchy about having missed the dog party.

Speaking of the dog party, it was a dog party friend who made the #lukestrong cookies in the picture. Aren't they great?

We had an 11:00 appointment in clinic this morning to get his port accessed and get fluids started. We can do all of that at the hospital, but he really likes and trusts the clinic nurses. Once we were settled in the hospital room, I picked up some Japanese food for the two of us for lunch.

Two of his favorite teachers from elementary school came to see him this afternoon. He was really happy to see them, and they're planning to get together again soon. I can't believe I didn't get a picture!

He's getting two new drugs this week -- Etoposide and Ifosfamide. Ifosfamide requires a couple of liters of prehydration, a minimum volume of urine output and a certain specific gravity of the urine before they can start, so the first drug didn't start going on board until 7 pm. Luke fell asleep about an hour after they started and is still asleep. The second drug is going in now.

I'm sitting in my bed hoping and praying that he sleeps well and that the side effects are mild. I'm missing Kate, Teddy (and Timo). Paul was here for a few hours so I'm not really missing him yet. Luke had a tough time saying goodbye to Penny this morning. That was hard to see. Boy does it stinks that he has to go through this.

Thank you all again for everything.