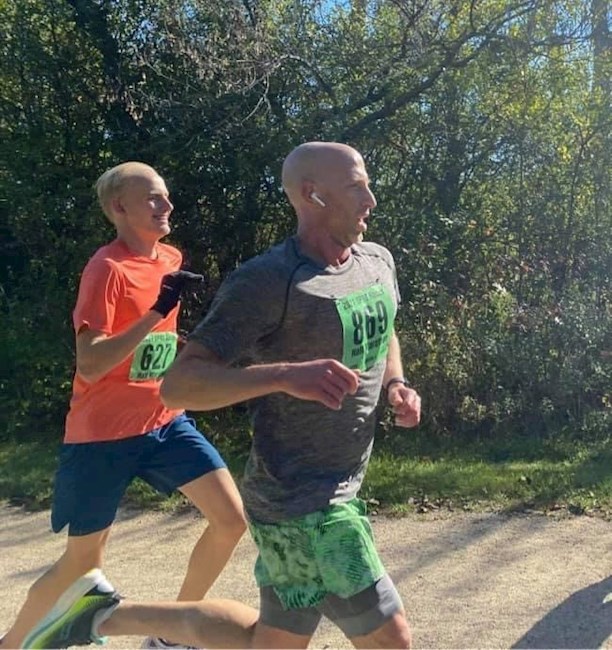 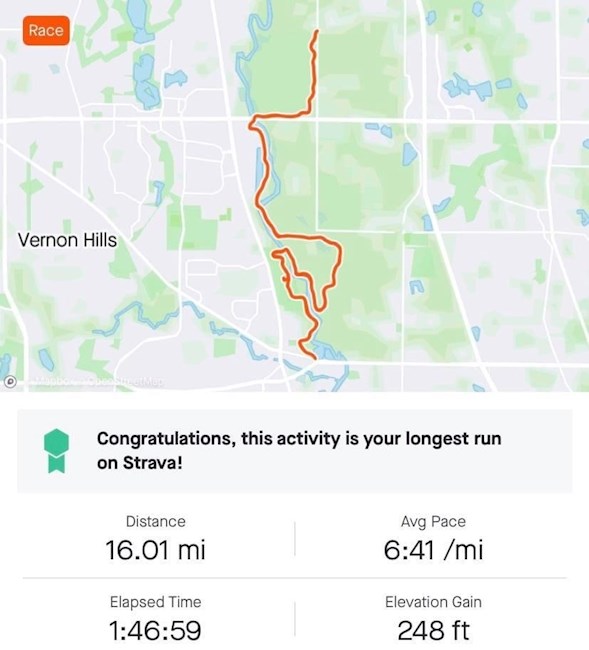 Hi, it’s Luke.
Thank you to everyone who has donated to my half marathon fundraiser for Children’s Cancer Therapy Development Institute. You’ve nearly doubled my original goal, and I so appreciate every dollar.
My race was on Sunday, and it went better than I anticipated despite running 16 miles instead of 13.1. I completed the half marathon in 1:26:41 according to my watch (6:37 average mile), also I was the unofficial overall winner out of a field of 350.
When I reached the second of two out and back turnaround points, there was a sign saying, “half marathon turnaround ahead,” but the turnaround point was right there. So, another competitor, Stu, and I ended up running 1.5 miles past the turnaround point on the marathon course for a total of 3 miles extra. We didn't turn back until a biker caught us and told us we missed the turnaround point. I paced with Stu starting at mile 2 until the end. I didn’t think I was capable of this, and I certainly wouldn’t have done it without the solid pacing of Stu.
Throughout the race, and particularly when I was struggling or in pain, I thought of how much more pain cancer patients endure. I also thought of how grateful I am to be able to run, in addition to being alive to enjoy the beautiful weather and forest.
I thought about Megan Bugg, who is as determined as ever on her sixth relapse and has raised $500,000 and counting for rhabdomyosarcoma research, along with being a powerful voice for pediatric cancer awareness. Megan had surgery today to fix a CSF leak, so please keep her in your thoughts and prayers.
I also thought about those like Mike who did everything in their power to stay alive but to no avail.
As you all know, I am the exception, not the norm, in terms of my alveolar rhabdomyosarcoma outcome so far. With your help, CC-TDI can ensure that long-term survivorship will be the norm, not the exception.

Hi, it’s Amanda. I just wanted to echo Luke’s thanks and let you know how incredible it was to watch him run on Sunday. I’ve accepted that I’ll probably always cry when I watch him run. I’m so impressed by the race that he ran, but I’m also bummed that he didn’t get to be recognized as the winner. The guy at the turnaround put the cones out after Luke and Stu went by! The director apologized but couldn’t do anything other than offer them free race entry next year. The guys who placed in the top 5 wondered how that was possible bc they knew Luke and Stu had been well ahead. As a mama, I was pretty steamed and sad, but Luke was a great sport about it. I’m sure he’ll really study race maps for any future races. If you’d still like to donate to Luke’s fundraiser, here’s the link.

I’d also like to echo Luke in requesting love and prayers for Megan Bugg. She is a truly remarkable young lady who has gone through and is currently going through more than anyone should ever have to. It’s just not fair.