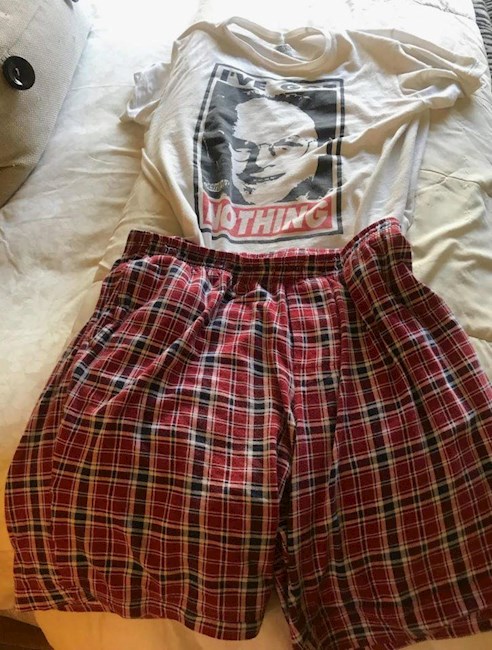 Hi everyone, it’s Simone writing today’s post. My mom is totally knackered after many long days and just wanted an early night. She and our cat Eartha (aliases: the Slab, the Gat) are snuggled up and fast asleep as I type this.

In tartan news today: Linton’s cousin RT from California sent us a picture of his favorite pajamas, which just so happened to match the tartan (or as I would say, plaid) theme that’s been popping up so much recently—‘tis the season. RT said he’s showing his solidarity with Linton, or the “Tartan Man,” as Andre is now calling him.

Padre, err, Linton, is continuing his upward progress. Today his WBC increased from 0.4 to 1.0, meaning he has already surpassed the 0.5 prerequisite baseline for being discharged, but he is not out of the woods yet—his counts must show steady progress for an additional three days after hitting the baseline in order for him to be cleared to return home.

His ANC also increased, going from 0.1 to 0.6. However, his platelets fell from 16 to 12, indicating that he has not yet begun to produce his own native platelets yet. As the nurse told us yesterday, this may ultimately be what keeps him in hospital even after his WBC and ANC counts have returned to acceptable levels.

Linton is still feeling tired but seems to be in better spirits because he was actually talking about food. He said he was craving a slice of hot pizza and revealed to Darren via text that his favorite foods are pizza and pasta. He also commented that he could go for a meat pie (possibly my favorite food after pasta) with chips, and promised that we would go to the one restaurant that makes them when he is feeling stronger. It was one of the first places we went to in the days after his diagnosis, and it will be good to go back when he’s healthy again.

Sadly, Linton had to settle for the hospital’s hamburger for dinner rather than pizza, pasta, or pies. He said it tasted strange, like how he’d imagine a Soylent Green hamburger would taste. However, he did an admirable job of trying to eat it, and has been eating more than just his regular cup of soup.

As Linton has started to grow stronger, there has been one complication—this morning, a boil water advisory was issued for parts of the city, including the area where the hospital is. On Sunday, a water main broke just down the street. Although water pressure was restored within a few hours, the boil water advisory has been issued as a precaution.

Linton with his provided bottled water, the only form of water he's allowed while the advisory is in effect.

In order to keep the vulnerable patients in the transplant unit safe from any potential contaminants, they have been prohibited from showering or washing their hands with tap water. Instead, everyone has been wiping their hands with disinfectant wipes and hand sanitizer. A nurse told Linton he could wipe himself down with a bunch of cleansing cloths (kind of like make-up removal wipes) in lieu of showering, but he said he would prefer not to as they leave a sticky residue that makes him feel even more gross. The nurse assured him he didn’t smell, and she’d tell him if he did.

Linton’s hair has also started to fall out. His eyebrows are still intact, but the back of his sweater is covered in hair. It’s now a competition between him and Eartha to see who sheds more!

He looks just like me after I've picked up the cat!