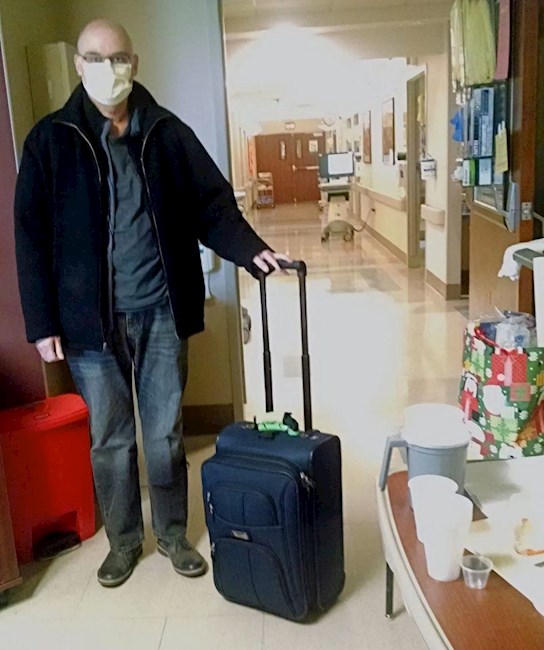 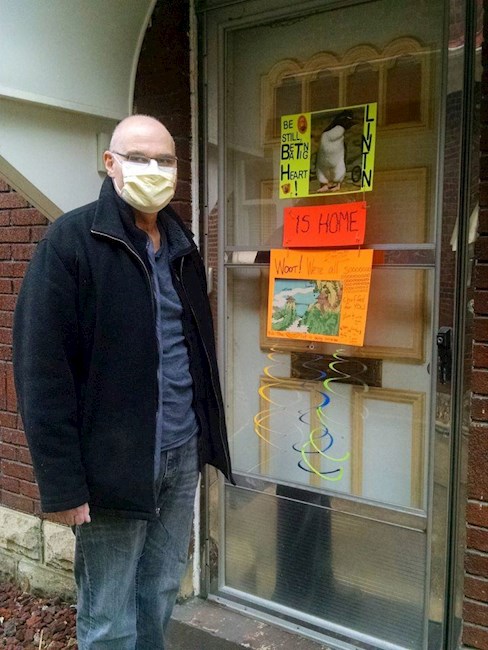 Before Linton could be discharged, he needed to have the Hickman tri-fusion central venous line removed from his chest. It had served him well during his almost three-week hospital stay: for the administration of the two high-dose Melphalan chemotherapies, for the stem cell transplant, for the three days of IV saline, for the multiple platelets transfusion he’d needed, and for the daily blood draws.

But, now it was time to go. He was looking forward to being without the three dangling tubes hanging out of his chest, and having to cover them up each time he showered with a large piece of Glad Press 'n Seal. No more weekly dressing changes! No more daily flushing of the lines! No more ‘pencils’ dangling under his T-shirt!

That brought his platelets up to 29, and he was mid-way through his breakfast yoghurt when the patient transport guy knocked on the door and said: “Let’s get you down to IR, now.” (IR, we found out, is Interventional Radiology.)

There, a very competent and professional PA (physician’s assistant) got to work on chiseling out the central line. The line had been in place for seven weeks, and in that time the collagen-type cuff at the end of the line had started to embed itself into the surrounding skin. The PA had to use blunt dissection to free it. Linton said it was rather unpleasant despite the topical Lidocaine injections to numb the area.
After ten minutes, the cuff was loose, and the PA said, “Take a deep breath in, and then let it out slowly.” As Linton breathed out, the PA whipped that long, straw-thick plastic tube right out of the vein in one clean swoop! It was painless.

He then very diligently applied consistent pressure to the site for ten minutes, and put a pressure dressing on the site. There was no bleeding at all! Even with a platelet count of 29.

Later, when the attending physician came around the ward for his daily rounds, he asked to see where the line had been removed. He was visibly surprised at how bloodless the dressing was. He told Linton that he’d expected it to be blood-soaked! Kudos to the PA who managed such a sterling line removal despite the-less-than adequate platelets.

Today was a slow day, of on and off dozing and then a welcome visit from G. and A. who cheered Linton up with their good-natured banter. Linton also finished off painting his Beating Myeloma with Science tile.

Tonight Linton didn’t get a Neupogen shot; it was felt his white blood cells were responding well, and he’d already had ten consecutive daily Neupogen shots since Day +5. His ANC this morning was a very acceptable and normal 3.7 (low-normal is 2.2); his WBC count was now well into the normal range at 5.8 (low-normal being 3.8). His hemoglobin was still hovering around 9.0.

Later, it was off to sleep for the last night in Room 742, with a radiant sunset to see him off to bed.

Linton’s last day on the Stem Cell Transplant Ward! A bittersweet day indeed, as it’s been his home for 19 medically-adventurous days. Both he and I have experienced much genuine warmth and caring and concern from the nursing staff, the PCTs (patient care technicians), the food services personnel, and the secretarial staff. The rotating attending physicians have ensured that his treatment was top-notch. We grew particularly fond and appreciative of the outstanding hem-onc Fellow who would come around twice a day to talk about how Linton was responding to treatment. She carefully and thoughtfully answered all and any questions we had, and she and Linton enjoyed chatting about science and biology.

This morning Linton’s platelets had held steady at 29! However, to give him a needed boost and to help tide him over until his next SCT clinic appointment in four days time, he had another platelet transfusion this morning (from B+ pooled donors). This time the platelets were delivered through an IV line as his central line is no more.

While Linton was having his platelets infused, his fellow “bone-marrow-brother”, JB came by for a visit. JB is on Day +2 of his SCT, and is in a room just down the way. Linton felt wistful having to say goodbye to JB because I think both Linton and JB felt comfort in having someone they know on the ward and going through the same arduous process.

While Linton’s platelets had held steady overnight, his ANC had dropped slightly (3.4 down from 3.7), as had his WBC count (4.5, down from 5.2) no doubt because he’d not had the stimulating help from the Neupogen last night. But, all is acceptable and he was cleared to pack his suitcase and get ready to leave.

Linton looked at the hand-drawn graphs of his blood cells counts for the last time and then rolled them up! It’s interesting to note the varied perspectives the different medical personnel had about those graphs. The nurses all cheered Linton on with his plotting. However, only two out of the four physicians he saw were comfortable with the daily graphing. Interestingly both physicians who approved of them were women. The two male docs seemed either concerned that the daily graphing of the counts would make Linton anxious or were dismissive of bothering to draw them by hand when one could log-on to the patient portal and get a computer-generated graph at the touch of a button. However, with the long hours stretching ahead of him each day, Linton enjoyed getting out of bed to add another mark to the graph himself, as well as being able to see the graphs at a glance from his bed.

This means wearing a mask when venturing out; avoiding crowds and public spaces; staying away, if at all possible, from young children as they are prone to passing along all sorts of sniffles and sneezes; no lawn mowing for a year; no raking leaves; no gardening (to avoid soil-borne fungal diseases); no air travel for a year; no cleaning the cat’s litter box (petting Eartha is allowed, but wash hands thoroughly thereafter); no eating at fast food restaurants or from buffets, etc.

Linton had packed his suitcase, and was about to leave the room when we heard strains of music and singing coming from the hallway. I dashed out into the corridor, and there was a man, dressed in a tux and a red cummerbund, singing a Frank Sinatra song into a microphone. Other patients had also heard the music and were coming out of their rooms to see what the occasion was. It was a Holiday Party for the patients!

The head nurse told me that each year the nurses apply for grant money to use toward two parties for the patients – one around 4th July, and the other a December Holiday Party (just like our street block parties!)

They gave each patient a gift bag and had specially-prepared, safe festive food for the patients, as well as free raffles and the gingerbread house contest.

Plus the singing! The gentleman who provided the entertainment was the husband of one of the patients (I wish I’d gotten his name) – he sang so well – it was like having an older, but just as melodious, Michael Buble on 7 West.

Sorry this is so blurred, but I was singing along and trying to focus at the same time, while Linton was trying to hurry me along and leave.

In the gift bag that Linton received was a gift certificate, some lip balm, two nice pens, a puzzle book, a mug – and wait for it – a fleecy blanket. In a red and black tartan pattern!! We grinned wildly at one another when we saw that.

Linton donned his mask, we said a goodbye to all the nurses and PCTs. Then, for the first time in 19 days, Linton was allowed to walk through the swinging door at the entrance to the SCT Unit.

When we got home there, on the door, was a colorful and witty Welcome Home Poster to greet Linton on his return home. It was such an unexpected and entertaining surprise for Linton – thank you G!

Then on opening the door, on the doorstep, was a package – toasty Tartan slippers – from Linton’s youngest friend in Cambridge. Together with Linton’s tartan pyjamas, they complete the outfit.

The first thing Linton did on his return home, was to make a toast and cheese sandwich. Look at the smile – his first slice of toast in three weeks.

And that evening, to finish off a memorable day, Linton’s niece went out, wearing a tartan jacket.