Site for keeping everyone up to date about Papa Don' progress.

Site for keeping everyone up to date about Papa Don' progress. 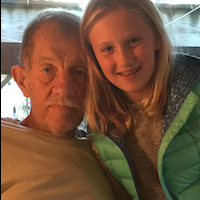 Very nervous and worried about arriving yesterday.  Must be honest here - as soon as I got to the Flint airport, I instantly went into panic mode.  Once at my mom's house, I had two tylenol and a rum and coke - courtesy of Joel. That, by the way, did the trick.  Things went much better than anticipated today.  Went to breakfast with my Mom and Joel. Sydney loved the restaurant - Bob Evans. When we got to my Dads,   Mark (my cousin) was there  working away.  (Mark has been working on the Mud House and any project that needs attention for several weeks now).   Thank you Mark for all your help !   I can't say that enough !  Also, super nice to have someone here to  welcome us so sweetly & carry our suitcases up two steep flights of stairs ! Lucky girls.

My dad was up and waiting to see us... his friend Kevin was here waiting as well. Yay me!  We took a few minutes to go meet Cass, Don and Lynn who are all long time friends who have been helping  Dad over the past few months. Super nice people. Very concerned and generous with their time!

Dad was doing good with regard to his coloring,   his speech and attitude.  (He did seem just slightly agitated a couple times with regard to a furrowed brow but  Mark, Sydney and I  ignored it and just `were lovin'  on him and staying calm & quiet).  He primarily was sitting in the living room chair or at his desk. He was not out of breath too much bot not really moving around much at all either.  He is still doing the Gerson diet and  talks about what he should and shouldn't have but after Kevin leaves, he admits he hates most all of it. He says he can hardly gag it down and in fact can barely eat.  We talked about his freedom to do whatever he chooses and how I support his choices.   I think he vacillates a bit about it  and I am not yet certain why or what that means. I have stressed that his caloric intake must increase for his over health (malnutrition).    Kevin was interested in having a 'pow wow' but i was not.   After he could see that Mark and I were not engaged,  he left for a meeting.  Five minutes later, he returned saying his meeting was cancelled and he could stay until 7:30 pm   One minute later, Mark, and Sydney and I left to go to dinner and returned at 7:38 pm

Sydney and I spent the rest of the evening talking with Dad about recipes that we could try to make  (using the Gerson approved list)  to give him a change up of juice and soup and the cabbage he hates.

I plan to talk to the Gerson doctor tomorrow about his caloric deficit  - especially the fact that he has no healthy fat in his diet at all.  I asked Kevin what the doctor is saying and his answer is "to eat the food, drink the juice...."   I also asked how the Mexico doctor is able to treat my dad without him being physically present  ?   "this is the way they do it for everyone... its in the book..."

Dad also has three toes that  are black and blue and says its just from circulation when his legs are bent while sitting. He didn't want to focus on that too much and so another day.   Will keep an eye on that.