The night was uneventful with intermittent awakenings for suctioning & position changes.

A different Rachel was his day shift RN.  Dr. James Conway, Intensivist, came to visit Perry & discussed today's plan for chest CT scan.  Dr. Lane, Pulmonologist, then rounded with plan for chest CT scan today & explained why he did not want to proceed with EMG of diaphragm due to the present yeast infection in the fluid collection outside of the L lung & mediastinum (breastbone).  He discussed plan for Perry to continue with trach capping & be on CPAP (continuous positive airway pressure) intermittently during the daytime to help facilitate the vent weaning process.     [...] 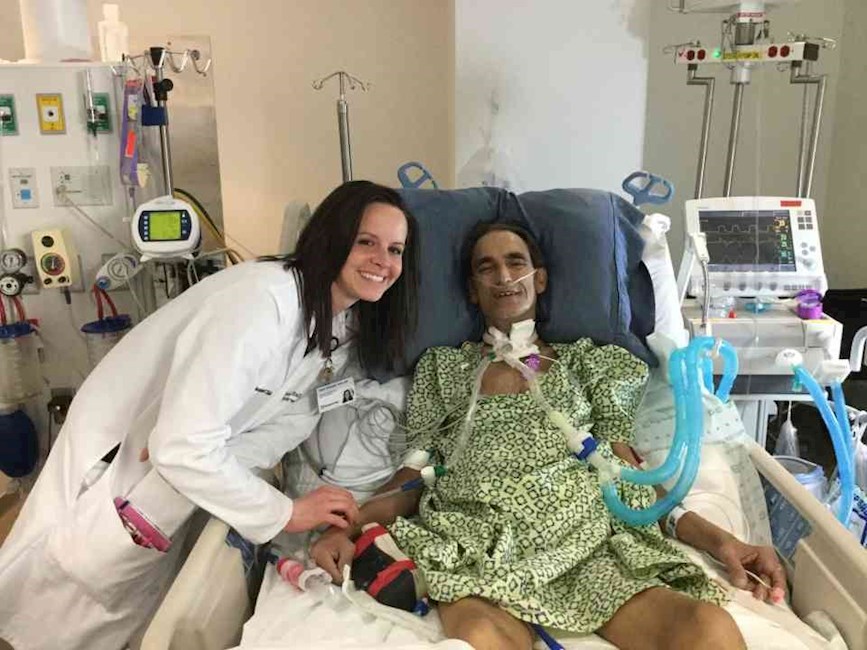 Once again Perry's night was uneventful from his usual. He was started on 4 hr dialysis @ 745a with 2 liters of fluid removed, so he's a dry as a turnip. He slept a majority of the treatment, so I was able to sleep a little extra too. The blood flow had slowed with position change, but increased shortly after returning to his R side & finished dialysis @ 1148. Dean PT stopped by & asked to speak to me outside of Perry's room early this morning. He informed me that he had spoken with Dr. Anandamurthy, Intensivist, & had been given permission for Perry to be taken up to the rooftop tomorrow. He wanted to know if that would be okay & as long as he could get the needed staff (RN, RT) on the same page, he would like to plan on ~1130 tomorrow as it's supposed to be in the 70s & very soon the temperatures are expected to decline. Of course my answer was YES!!!!! He didn't want to tell Perry in the event it would not come to fruition. Perry's Aunt Thelma called & was updated on his condition. Dr. Lane rounded & informed us that the EMG of the diaphragms with phrenic nerve stimulation is part of his plan. He will go for a chest CT scan tomorrow for a comparison to his last one done on 10/7. We were informed that there is yeast growing in the cultures from the pigtail chest tube catheter secretions obtained on Saturday afternoon, so I'm really glad to have checked as to whether or not cultures had been obtained during the insertion procedure. He was started on daily IV Micafungin 100 mg, an anti-fungal. Nephrology Dr. informed me they will increase his weekly dosage of Erythropoietin (helps bones to make red blood cells) for his anemia & while he is on the anti-fungal medication. Dr. Koval, Infectious Disease, rounded & I updated her as to the current plan relayed by Dr. Lane. Got into chair mode with initial complaint of abdominal discomfort but able to relieve several burps. It has been such a blessing not having an overly distended abdomen since he began trach capping & chewing the Mylicon so it can have an effect on his stomach too!!! No KUB abdominal X-rays have needed to be done for a few weeks now!!!! Dr. Anandamurthy, Intensivist, revealed to Perry of the plan to get him to the rooftop, so he was happy to hear the news!!!! At the same time that I asked when Perry was able to stop having a daily chest X-ray taken since he's had one everyday & then some since 7/27, he was going to tell me that he would like for X-Rays done every other day or less often unless his condition warrants otherwise. He was able to tolerate trach capping from 1319-1341 (22 minutes) on 4 liters oxygen via nasal cannula with a little purplish red color change noted near the end. He has remained in a very sleepy state throughout most of the day. Word was received that Char's hip replacement surgery went well. Varcia RT trialed Perry on BiPap mode without capping to see how he would do. He was able to tolerate a few minutes & slept for awhile longer. He then had an OT session with Kim while chair mode to work with therapeutic hand putty. Then returned his bed to bed mode, added his mirror to end of the bed, & he did reaching & hand to hand transfer exercises with a baseball followed by hand/wrist/arm exercises with 1# dumbbell weights & 0.5 # wrist weights to help control some of the hand shaking. I had the opportunity to extend my sympathies, hugs & kisses to another wife whose husband had been on J5-5 for nearly 4 1/2 months, had been transferred to another area so that he could have a large window exposure, then went to another ICU, discharged back to the the other area & 4 hours later back to the ICU. She & I were able to talk on many occasions while her husband was in J5-5 & afterward. He is at peace now & she was able to receive his death as a blessing now that he is no longer severely ill & suffering. Lots of hard times are experienced in my own life as well as those whose paths have been intertwined along the way. Perry then slept for awhile longer awakening to watch Jeopardy. In preparation for the Cubs vs NY Mets game, we did a video singing "Take Me Out to the Ballgame." We then FaceTimed with our son Michael & Perry's 1st cousin, Edie, who provided great "southwestern hospitality" as Michael visited & dined at her home in Las Vegas. Perry then fell asleep by 1010p before the ballgame was over & Nate RN then administered his bedtime medications.[...]

Perry slept per his norm & was cared for by Rachael RN as well as myself as needed throughout the night.  During his morning PT session, Perry was assisted to stand from his bed holding onto walker with Dean & Larry supporting him, me supporting the walker & Brandon RN assisting with his vent apparatus.[...]

Uneventful night with more of the same activities as in recent nights except that I know I did a lot of talking in my sleep & screamed out which was confirmed by Perry. We both were given mercy & able to sleep in a little longer by his day shift nurse Brandon RN. Dr. Kotloff visited & reinforced the plan to have an EMG of the diaphragms with phrenic nerve stimulation done sometime this week. With it being the weekend, the procedure will have to be scheduled tomorrow. Depending on the findings, the Pulmonology team may be referring to a physician at Case Western University who is versed with diaphragmatic pacers as to whether Perry may be able to be considered for such as typically they are used for patients with spinal cord injuries. Nephrology physician came by & the plan will be to do dialysis on Tuesday. I informed him of Perry's BP having remained low throughout all of yesterday post-dialysis & dehydration as his skin had sunken considerably between the bones in his hands. Perry was able to accomplish 2 trach cappings today on 4 liters of oxygen via nasal cannula. His first attempt was for 54 minutes (1101a-1155a) & his 2nd attempt for 55 minutes (553p-648p). Absolutely awesome!!! He remained calm & kept his eyes closed to focus on his breathing on both occasions. His hands became just a little dusky with pinkish purplish/blue tone color on each trial but his oxygen saturations remained 96%-100%. He was able to rid a lot of post nasal mucous with trach cuff deflation at the beginning of each capping. We were able to get the 2nd half of the Bears game due to technical difficulties with NFLDirect Sunday streaming but at least he got to see part of the Bears vs Detroit Lions game. He demanded that I rest on his bed beside him while he was sitting in the recliner during his 2nd trach capping. I kept an eye open & provided lots of praise & it was so nice to get to be a little closer to him. He did notice a little bit of a difference during the cappings with having drained off the 300 mL of serous drainage (total) since the pigtail chest catheter was inserted. He was back into bed with the help of 2 nurses & me by 725p. He got in a nap prior to the start of the Cubs game vs the New York Mets @ 8p. He has continued to have shaking of hands/feet but not quite so extensive as yesterday, & he had lots of shaking to his trunk as he dangled on the edge of his bed before being assisted to stand pivot transfer into the recliner. He fell asleep by the 6th inning, but I kept the TV remote by his head so he could hear the game. All of you in Chicago better cheer the Cubs on to victory over the next several days!!! We hope to continue to make progress here in J5-5 this coming week. Thank you all for the ongoing love, prayers & support!!!!

Sunday October 18, 2015 - Monday October 26, 2015 __ I fly to Your Mercy, Compassionate God, Who alone are good. Although my misery is great and my offenses are many, I trust in Your Mercy because You are the God of Mercy, and it has never been heard of in all ages, nor do Heaven or Earth remember, that a soul trusting in Your Mercy has been disappointed. (State your intentions) __ Jesus, Friend of a lonely heart, You are my haven. You are my peace. You are my salvation. You are my serenity in moments of struggle and amidst an ocean of doubts. Amen

Perry slept fairly well for the remainder of the night with intermittent position changes, adding/removing blankets for comfort, & oral/trach suction needed.  The dialysis RN arrived ~0630a to begin machine set up for a 4 hour dialysis session.  By that time, there had been ~300 mL of serous drainage from the pigtail chest tube catheter.[...]

He slept well for the most part in between his usual awakenings.  His feeding was once again stopped a few hours after midnight in preparation for pigtail catheter insertion.[...]

So I stayed last night as he just needs me here & I wasn't sure what time they were going to do the insertion of the pigtail catheter (smaller chest tube) or what time dialysis was going to take place.  I also wanted to be here when Dr Kotloff & the Intensivists rounded.  Perry became disconnected from the vent 4 times so I was glad to be & able to respond quickly as it took awhile before there was a staff member present.[...]

Perry had a rather uneventful night except for the same reasons which typically awaken him. He appreciated & was reassured having me here to comfort him & meet some of his immediate needs in addition to Erica RN.  He seemed be able to fall back to sleep with more ease.  [...]