Perry awakened during the night for position changes that he initiated as well as those that were staff assisted, oral suctioning, & due to 2 loose stools otherwise he slept fairly sound for Audra RN.  She continued to hold his Klonopin & Valproic Acid in order to maintain his BP in the 80s-90s/50s-60s.  There was not much drainage other than the initial 80 mL of serous drainage from the pigtail chest tube catheter.  Steve RN was his day shift RN.  Perry aroused on his own around 9a.  His oral mucous secretions have continued to be thicker & cloudy white.[...]

Perry had an uneventful night with few awakenings.  A chest x-ray completed during the night.[...]

Post for November 1, 2015 - Novena of Confidence to the Sacred Heart

We will pray this novena for Perry starting Sunday November 1st - November 9th (Due to the late posting, the dates may be changed to November 3rd - November 11th)[...]

Post for November 1, 2015 - A Long Night Made Even Longer Due to the End of Daylight Savings Time & Breathing Issues

Perry continued to require an increase in oral suctioning with thicker cloudy white oral saliva & mucous returns into the early morning hours.  While he was sleeping, Lora RN also noticed that he began to make noises as though secretions where in the back of his throat with a stridor type of a noise & some vocalization noises too & she continued to provide intermittent oral suction as well.  He awakened around 110a & complained of feeling as though secretions were stuck in the back of his throat & labored breathing.  His oxygen saturations remained 98-100% & his color was pink.  He tried frequently to cough & clear his throat.  An occasional ice chip was given in attempts to help liquify any thick mucous with additional intermittent oral suction. Maryanne RT suctioned down the trach with moderate amounts of cloudy white mucous returns as well & both Lora RN & I provided frequent oral suctioning as needed.  He continued to feel as though there were secretions stuck in his throat. Oxygen supplementation of 4 L via nasal cannula was started & Maryanne RT deflated the trach cuff with very little amounts of mucous if any were brought up & his cough was not effective in clearing any further secretions.  Maryanne RT completed saline lavages with cloudy white mucous returns.  His trach cuff was reinflated with 10 mL sterile water & he was returned to the vent.  The oxygen supplementation of 4 L via nasal cannula was continued.  Since he continued to complain of feeling as though secretions were stuck & labored breathing, she passed a suction catheter into his nose in attempts to suction his nasopharyngeal area with very little secretions suctioned out.  He began to make repetitive involuntary vocalization & stridor noises.  Throughout the entire timeframe, his oxygen saturations remained 98-100% & his color remained pink.  He was feeling warm although his temperature was not elevated.  I applied cold clothes to his forehead & his formula feeding was stopped.  The “On Call” Intensivist was notified & she came to see Perry.  She did not  want to sedate him in order to pass a laryngoscope to determine if he had anything stuck in his throat or trachea/vocal cords due to the hour & due to there being fewer personnel in the house.  He was tiring & in addition to Chloraseptic spray being given, he received Ativan 1 mg IV in attempts to make him comfortable.  About every 30-45 seconds a pattern of 4-7 involuntary stridor & vocalization noises continued in addition to wetness with Lora RN, Maryann RT, & I considering such to possibly be laryngospasms.  He was given Fentanyl IV ~445a & soon thereafter the involuntary stridor & vocalization noises were rather continuous.  Thanks be to God the entire time his oxygen saturations remained between 97-100% & he remained pink although exhausted with labored breathing.  By ~720a, Bill RT was at Perry’s bedside & he made a few ventilator adjustments, increased the amount of sterile water added to his trach cuff & soon Perry was able to rest & fall asleep with less labored breathing.  Of course since the clocks were changed during this event in reality the amount of time was an hour longer.  [...]

Perry had an uneventful night.  Elizabeth RN, his day shift RN, was also new to him & from another unit.  Dialysis was started @ 730a.  Greg & PJ arrived @ ~9a & Perry was intermittently awake during their visit.  I was able to see them off @ the elevators after passing through the ROYGBIV-lighted tunnel leading to the parking garage @ ~11a (ROYGBIV = Red, Orange, Yellow, Green, Blue, Indigo, & Violet = all of the colors in a rainbow).  Dialysis was completed by ~1115p with 500 mL of fluid removed.  Perry continued to sleep through the early afternoon hours.  He did not want to watch the Bears game despite my encouragement.  Shortly after Perry awakened, Varsha RT began trach capping @ 243p on 4 L of oxygen supplementation via nasal cannula. His secretions were a thicker, cloudy white when the trach cuff deflated.  He was able to remain capped until 427p.[...] 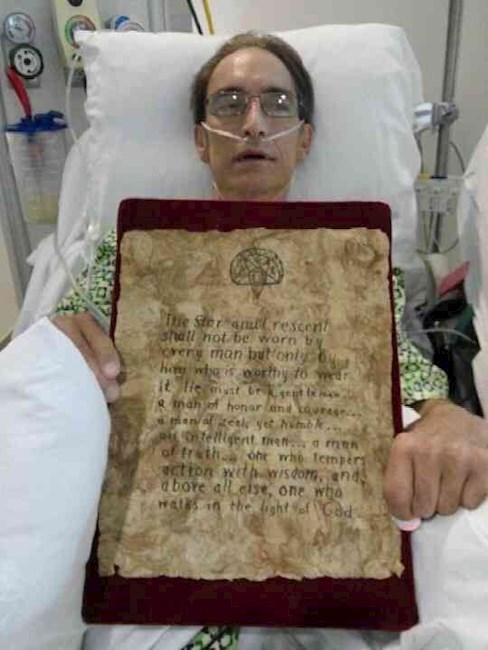 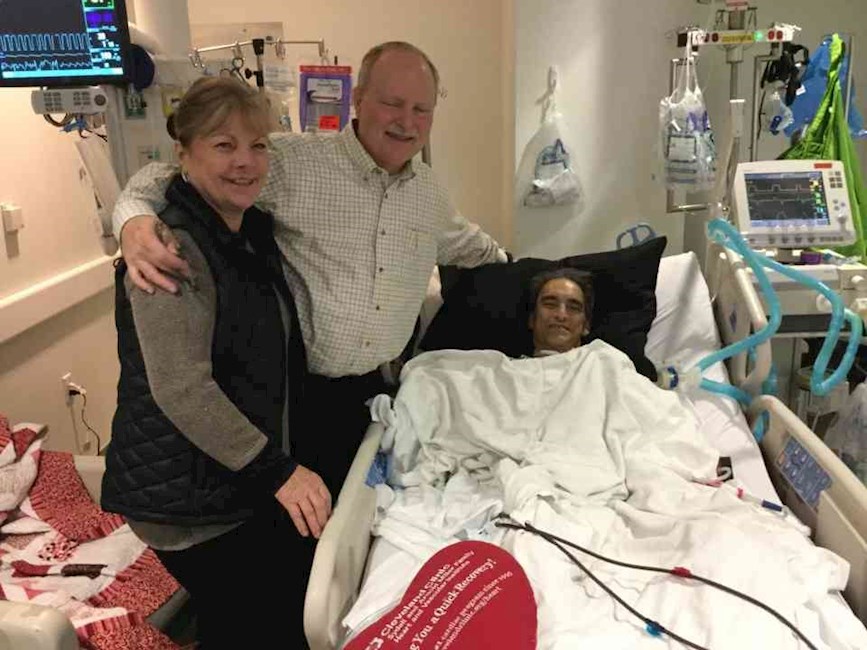 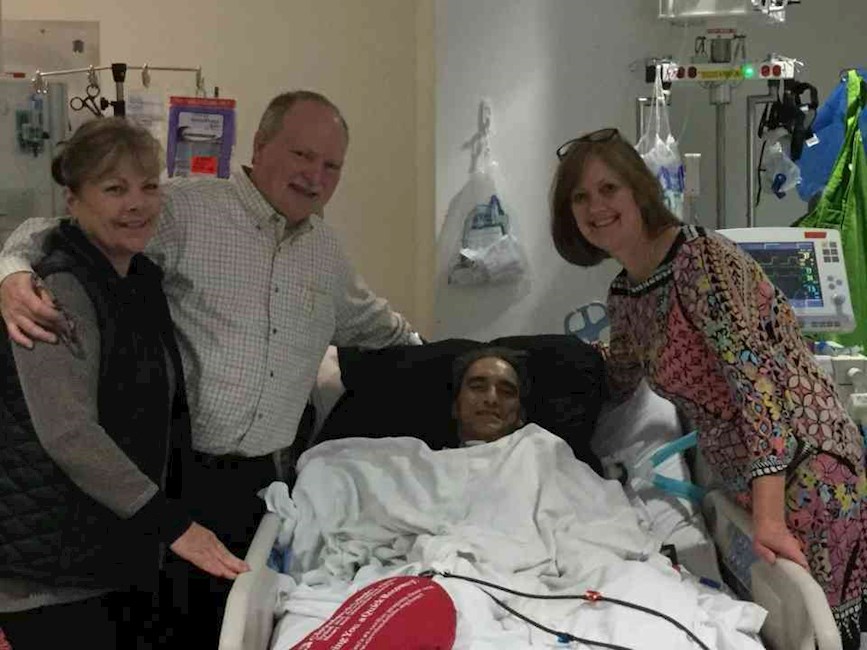 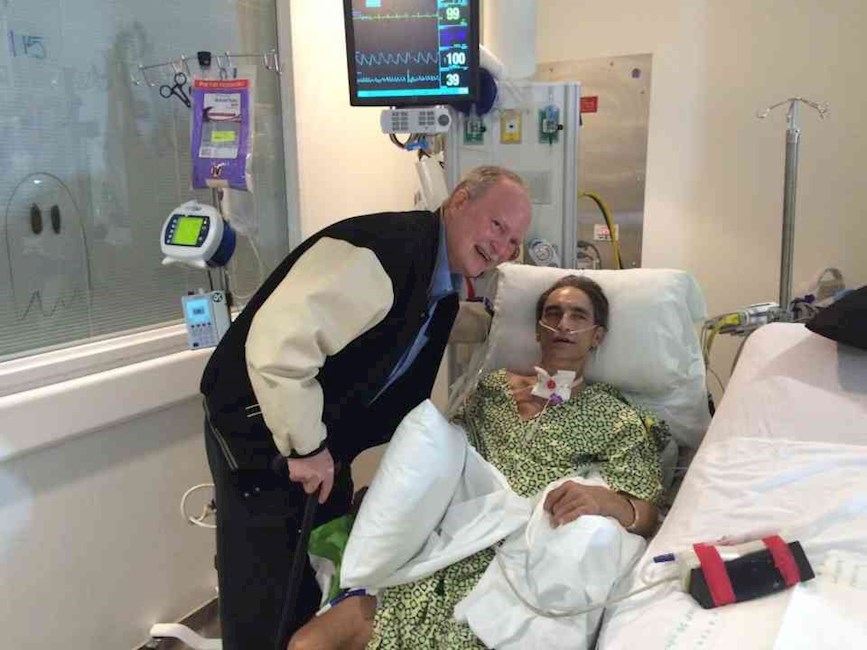 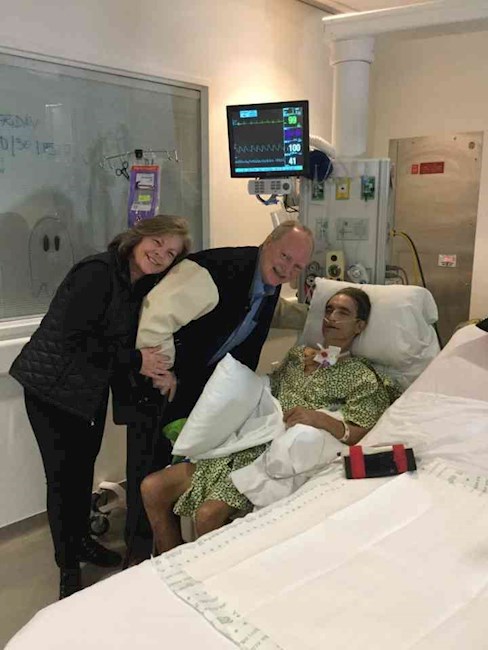 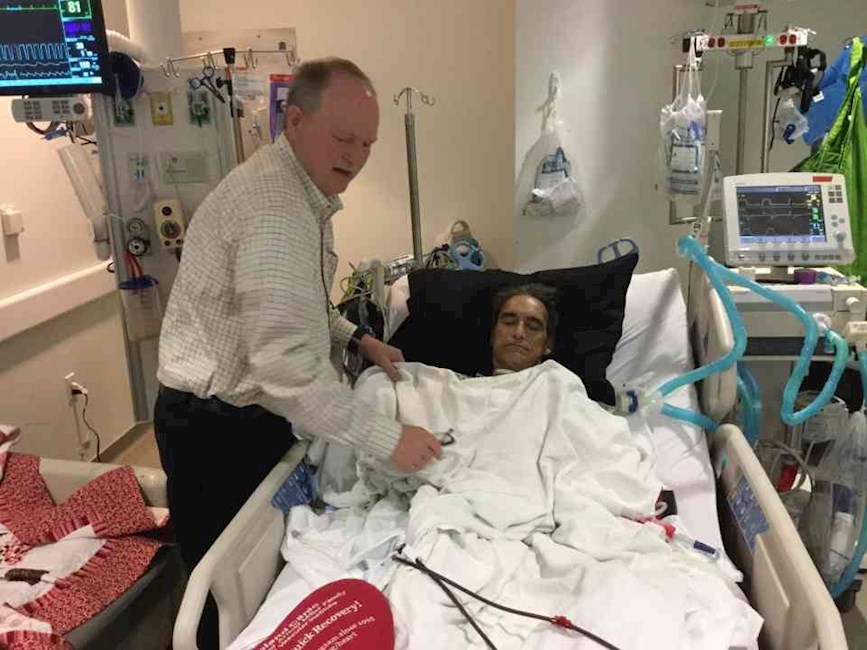 It was an uneventful night except for the typical awakenings.  Nate RN took over for the day shift.  Perry left the unit to go for the repeat chest CT scan @ 1025a with the transporter, Nate RN, & Varsha RT.  While he was gone, Janelle Romond APRN, BC from Psychiatry came.  I began to provide her with details relative to Perry’s past medical history.  Perry returned within a short time from CT, & additional information was shared to bring Janelle up to date.  [...]

Perry slept well during most of the night with his usual awakenings.  Audra RN was his day shift RN.  Trach capping per Bill RT began @ 951a on 2.5 L oxygen supplementation via nasal cannula.  Perry again began to experience extreme warmth, increased abdominal movement, & difficulty with more labored breathing so capping despite comfort measures of ice cold washcloths & fanning, so he was uncapped @ 1021a after completing 30 minutes.  He returned back to sleep rather quickly.  [...]

Perry seemed to sleep fairly well with fewer interruptions during the night.  Nate RN was his assigned day shift RN.  He too gave Perry words of encouragement throughout his shift of the progress he has made & reinforced that Perry had absolutely little if any reserve to go on before his transplant was done & every bit of what he did have was needed to breath.   [...]