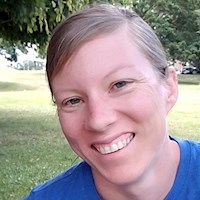 Cheri is taking the first of what will probably be several naps today, and she asked me to write a post to update about her second infusion and some other events of the past week.

On Thursday morning, Cheri's hair started falling out and it didn't take her long to decide it would be best to cut it short. That night after work we took the clippers to her head with a #2 guard and buzzed it all off. 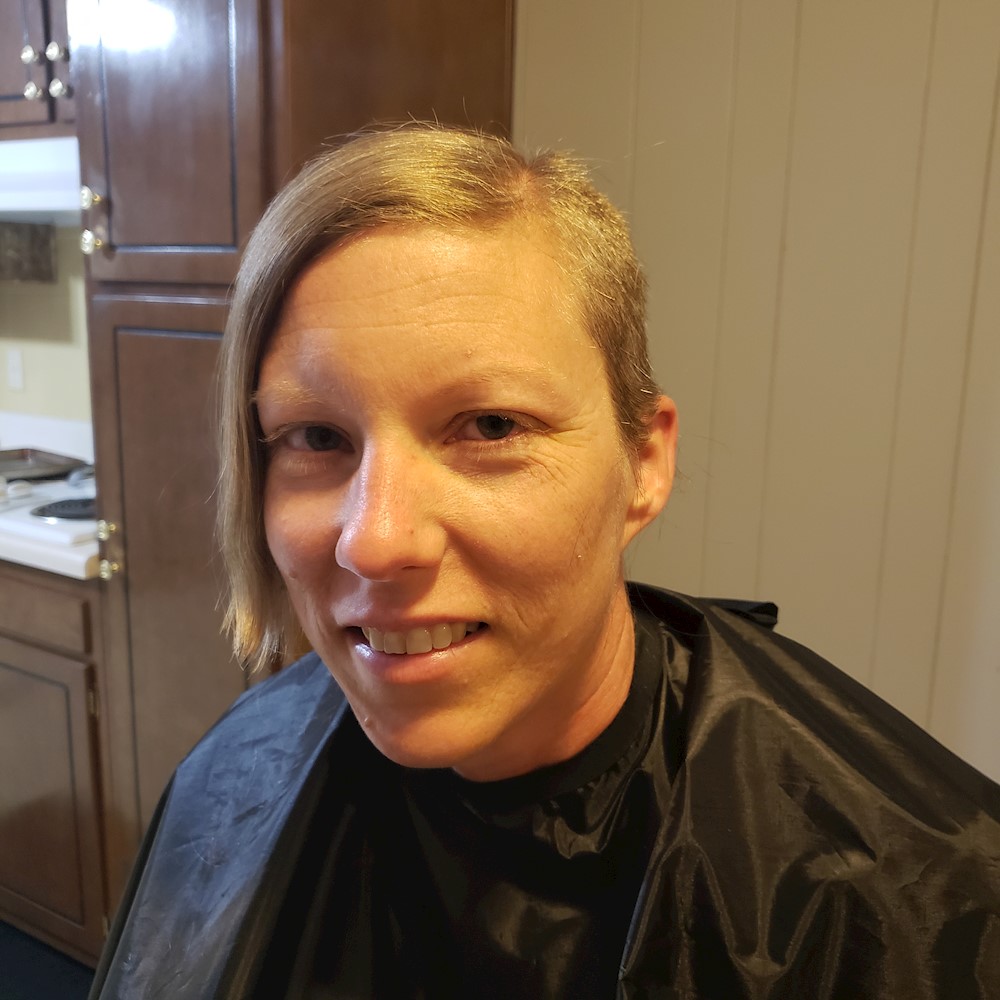 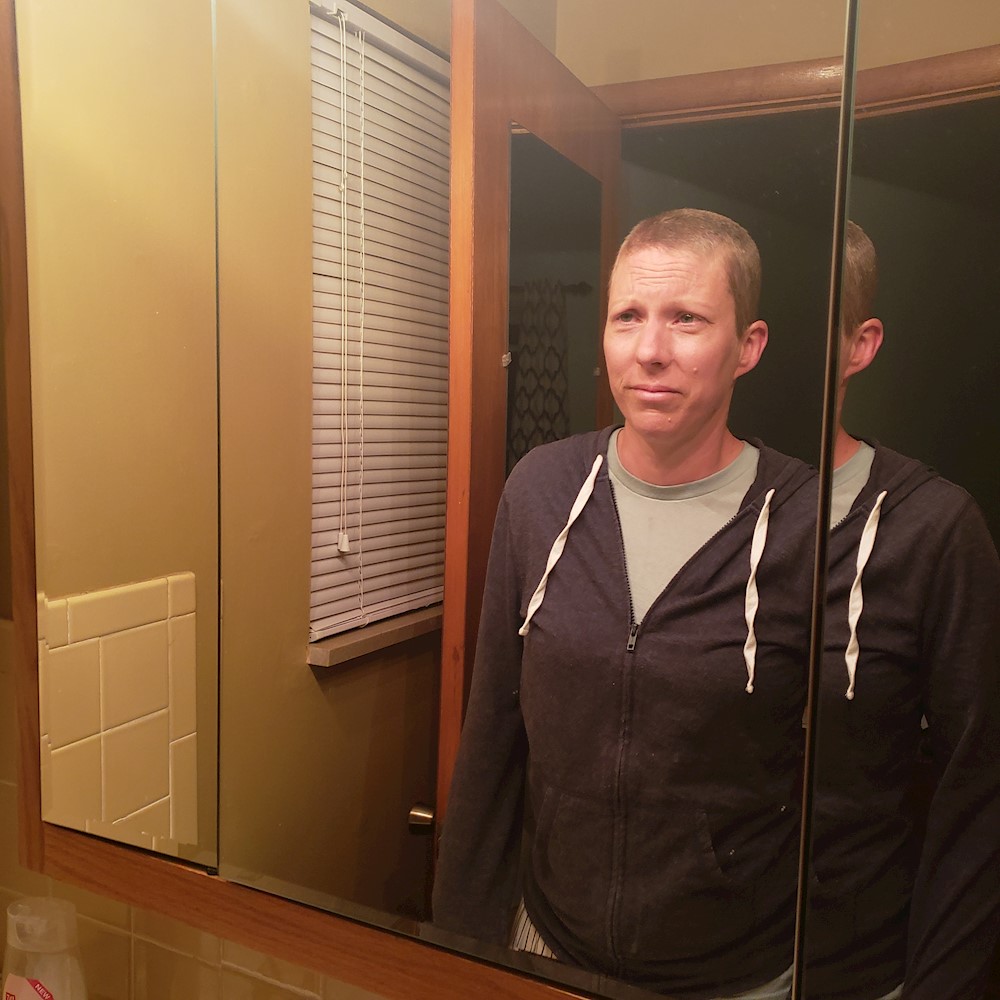 Looking in the mirror for the first time. We were both a little teary, but she accepted the new look quickly and even went to the grocery store on Saturday without any sort of hat or head covering, so I'd say she's doing well. Thankfully for Cheri, she has a nicely-shaped head. :) 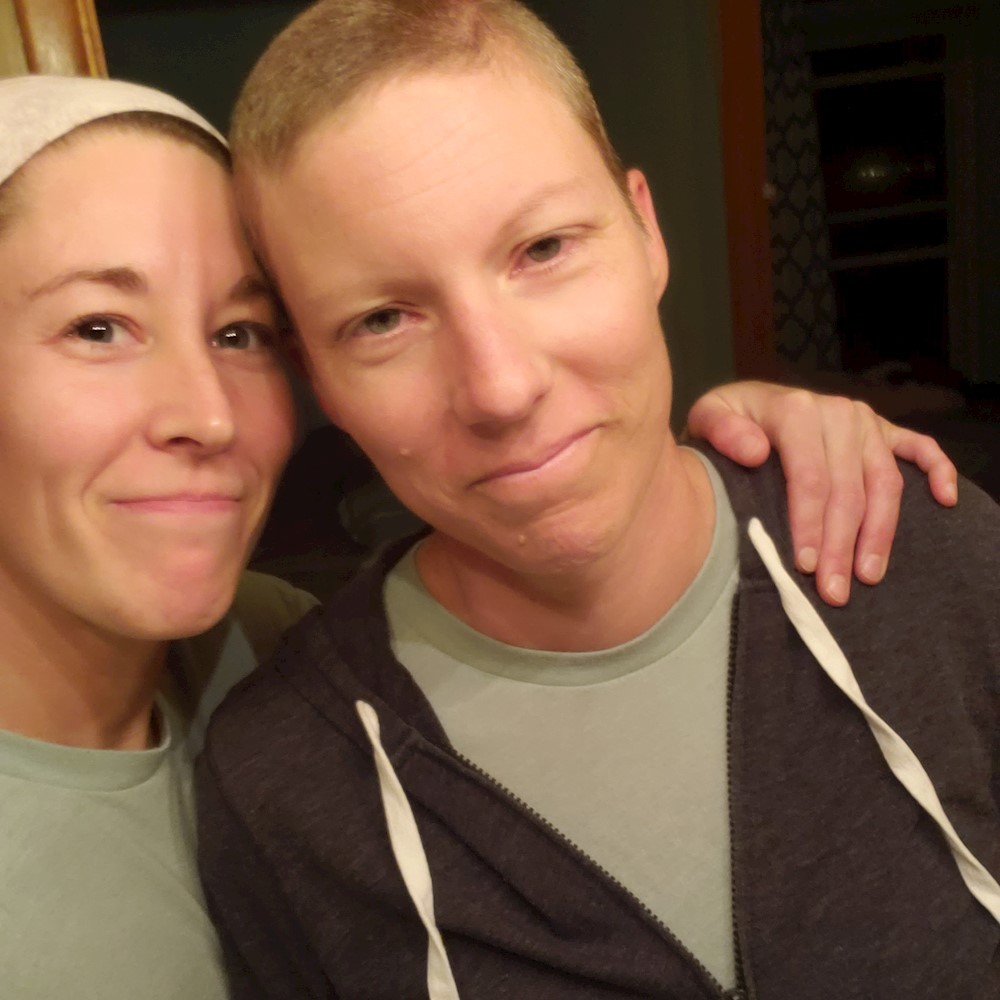 For those who are surprised that she isn't fully bald, it is coming. It will take maybe a week for these short hairs to fall out, but it's easier to deal with short hairs than long ones. I've read that it's better to cut it short rather than shave with a razor to help prevent skin irritation, so now she will just allow it to fall out "naturally," if it can even be described that way when it's the result of incredibly potent chemicals.

Friday morning was Cheri's second infusion and I am so thankful to report that the blood panel numbers she asked us all to pray for (white blood cell count, ANC and platelets) were all up and in a good range! It's a huge answer to prayer and it meant she was able to receive her second infusion without delay. Praise God for hearing and answering our prayers. 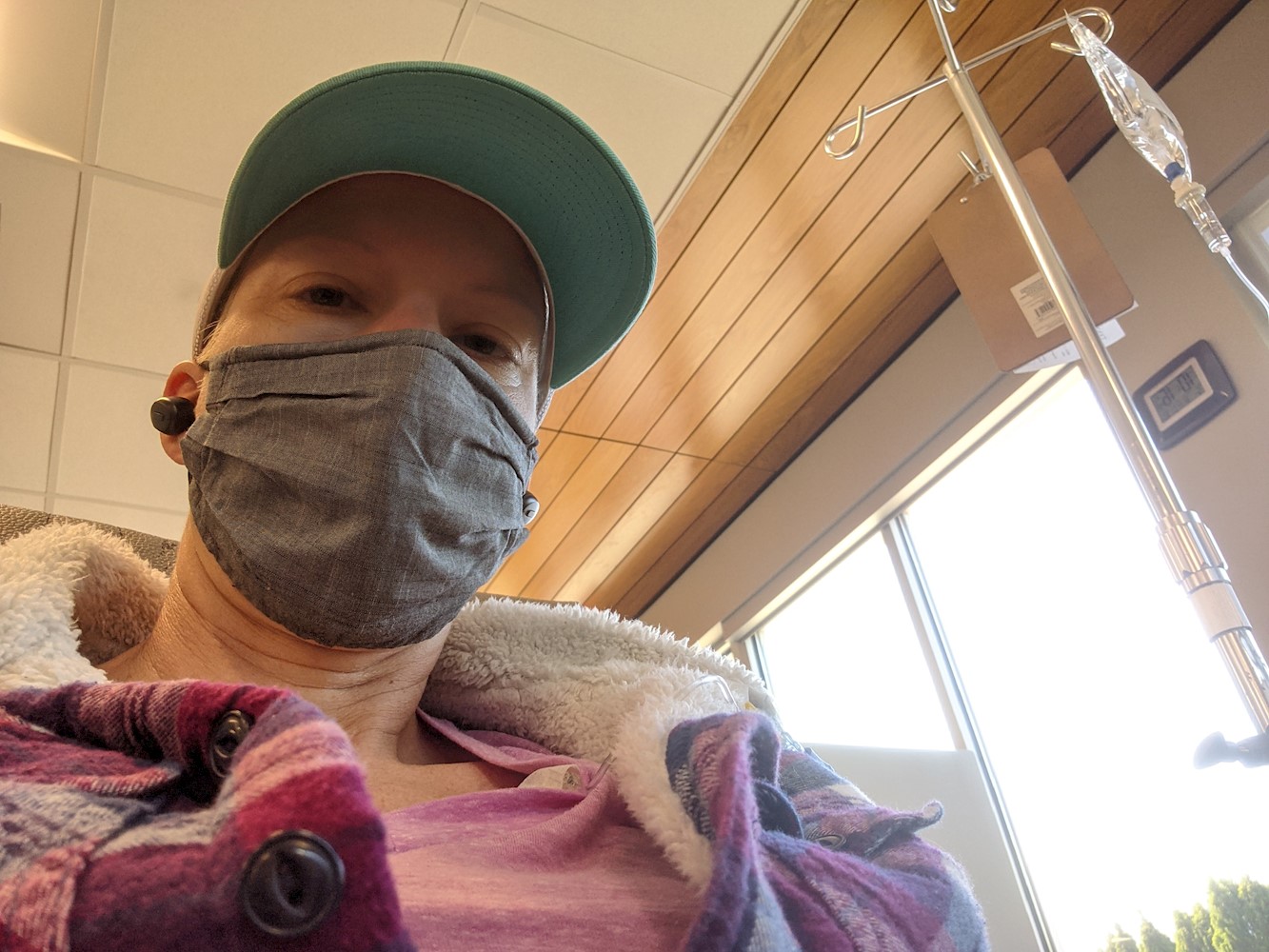 Halfway done with the Red Devil!

She was grateful to have a friend drive her to and from Chemo, plus the added blessing of flowers and lunch. God has definitely provided a growing circle of support around Cheri to help her with rides, meals and more.

After a brief rest at home, she came to work at the cheese shop for a couple hours until a wave of nausea overtook her and she returned home to rest. When I found her after work, she was ready to lie down on the bathroom floor to wait out the nausea. While Cheri does get powerful anti-nausea meds through her port prior to the infusion, as well as two anti-nausea drugs and the natural supplement of ginger, Friday evenings after her infusions seem to be difficult still. Therefore, I'm asking in advance for prayers on May 21st in the afternoon and evening, after her upcoming third infusion, that her body would respond well and that she would be spared this awful side effect. 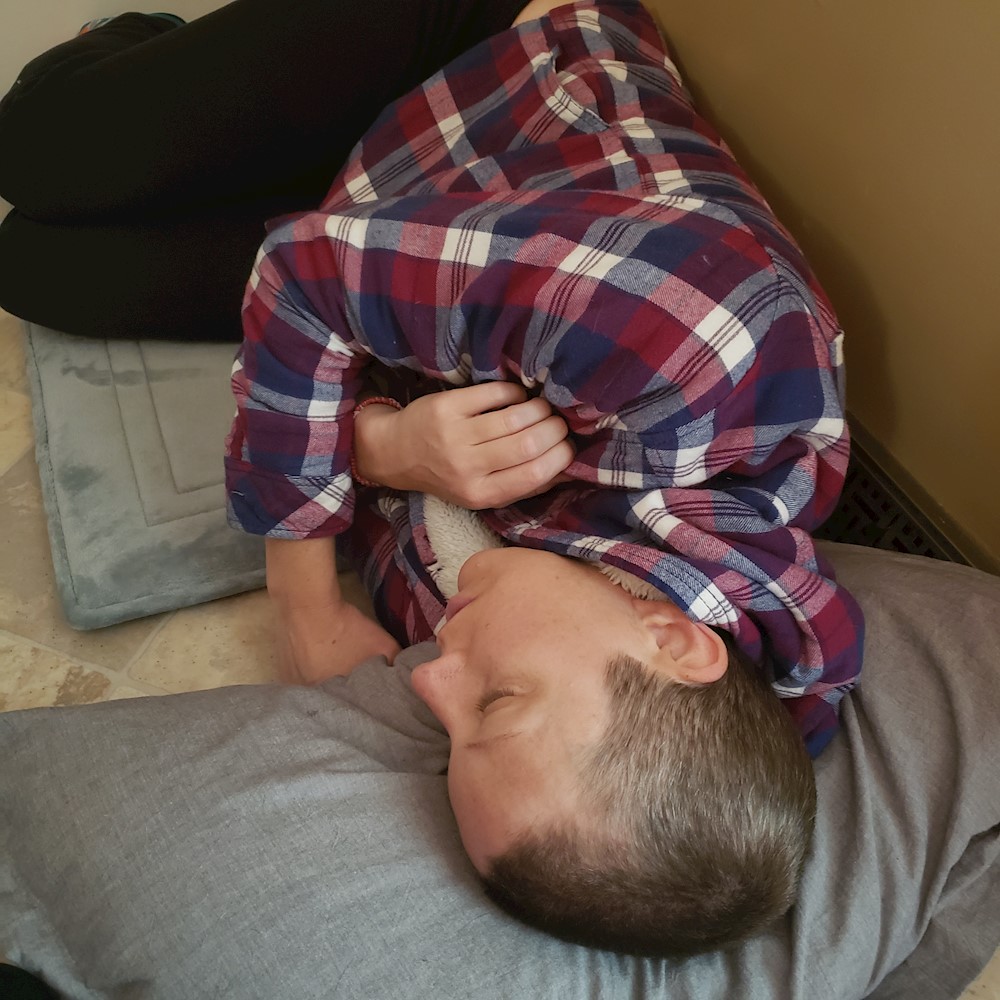 Her first post-infusion nausea period lasted about two hours; this second round resulted in more like three and a half or four hours. Thankfully, it did pass and she was able to get comfortable in her bed and get some food down. 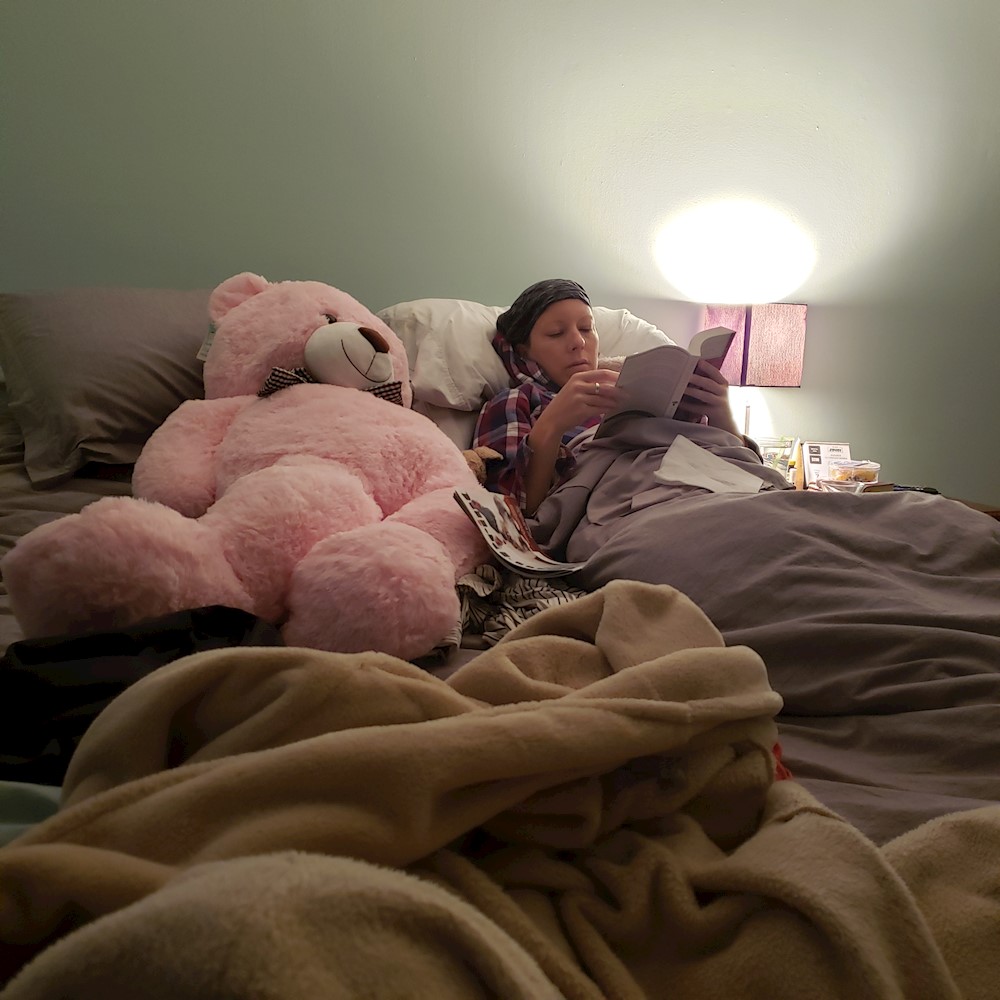 (The big teddy bear -- name TBD -- was a gift from my parents and has already provided some comfort for her. Cute, right?)

By Saturday morning, she was doing great and was able to work all day, with the exception of a little break for a power nap in the afternoon.

Thank you to everyone who has continued to pray for Cheri and send her messages, cards and posts on this site. We have talked many times about how she has done so well with chemo thus far and firmly believe that the prayers of so many have made a difference. Your messages continue to encourage her, and I'm so thankful to be able to say that her spirits remain high as she takes this journey one step and one day at a time.

The next few days she will be rather low on energy and will likely spend a lot of time resting, watching movies, napping and just generally taking it easy. Her parents arrived yesterday and went straight to work preparing food, washing dishes, walking dogs and doing various other projects and tasks around the house. It doesn't go without notice that even on Mother's Day, moms near and far continue to love, support, serve and care for their children. What a gift.