In the fall of 2013, my father, Warren E. Magnus, was diagnosed with a terminal disease called Lewy Body Dementia and Parkinsonism.

In the fall of 2013, my father, Warren E. Magnus, was diagnosed with a terminal disease called Lewy Body Dementia and Parkinsonism. 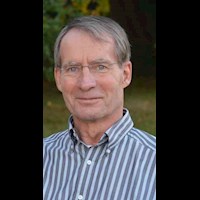 When I think of my parents, I recall the motto that they chose when they were married on July 9, 1976: "As for me and my house, we will serve the Lord." And such has been the case as they raised five children and faithfully contributed to their church and community over the years.

In the fall of 2013, my father, Warren E. Magnus, was diagnosed with a terminal disease called Lewy Body Dementia and Parkinsonism. At first the losses were more minimal and he was able to continue to work in the shop for another year, teaching lndustrial Technology at Walhalla High School.  Although his health continued to decline, my mother devoted more of her time to him and was able to care for him at home. On April 6th, 2015, the day after our family gathered to celebrate Easter, Daddy went to Sanford Hospital by ambulance, had emergency surgery and remained hospitalized for 3 weeks.

I took a leave of absence from my job overseas and flew home to be with my family. On April 27, 2015, my father's 69th birthday, a doctor delivered a hard blow. He told us that my dad was not retaining enough fluids or nutrition to maintain strength for much longer. The doctor said that unless fiber would help, we should start thinking about hospice as our next step. Through tears, we went to get him a fiber supplement. We also picked out a card and cheerful orchid for his birthday. And yet, it was a somber celebration as we choked down the dry angel food cake that night. But to our surprise, the next morning the doctor said that the fiber had worked and that my dad could be released to a nursing home for rehabilitation. We could hardly believe our ears and praised God!

Since that time, my father has been in the Pembilier Nursing Center in Walhalla, ND where he has had speech and physical therapy. The care is very good and his adjustment has been fairly smooth. His health has declined so that he now needs a lot of medications,  24/7 total care, and he can no longer walk on his own.  Daddy has good days and bad days, just like the rest of us, but overall, he chooses a positive, joyful attitude and would say: "So I live in this earthly body by trusting in the Son of God, who loved me and gave himself for me" (Galatians 2:20b). lt is this hope that keeps him going, being convinced that "nothing can ever separate us from God's love. Neither death nor life, neither angels nor demons, neither our fears for today nor our worries about tomorrow -- not even the powers of hell can separate us from God's love. No power in the sky above or in the earth below -- indeed, nothing in all creation will ever be able to separate us from the Iove of God that is revealed in Christ Jesus our Lord" (Romans 8:38-39). This Christmas, when all us kids and spouses gathered together as a family, we were touched by his words of encouragement as he prayed. He said, "Even when things seem evil, God is always good. So trust in Him! Don't lean on your own understanding. Put your hope in God."

Through this difficult time, my mom has also been strong and courageous. Yet I have also been concerned for her, because in addition to the emotional strain, she has been facing quite a financial burden. Even with careful budgeting there's not enough to pay for my dad's medications, medical bills, and her daily needs. There are past medical bills of $11,000 and ongoing bills of $1,165 per month. If the Lord puts my family on your heart, would you pray for daily strength, joy, and provision? lf you are moved to give even a small gift, I know that my parents would appreciate it so much and it would be a great help. Through this site, you can also write them a note of encouragement or share a good memory that you have together. Thank you for taking the time to read our story and for your care and concern.