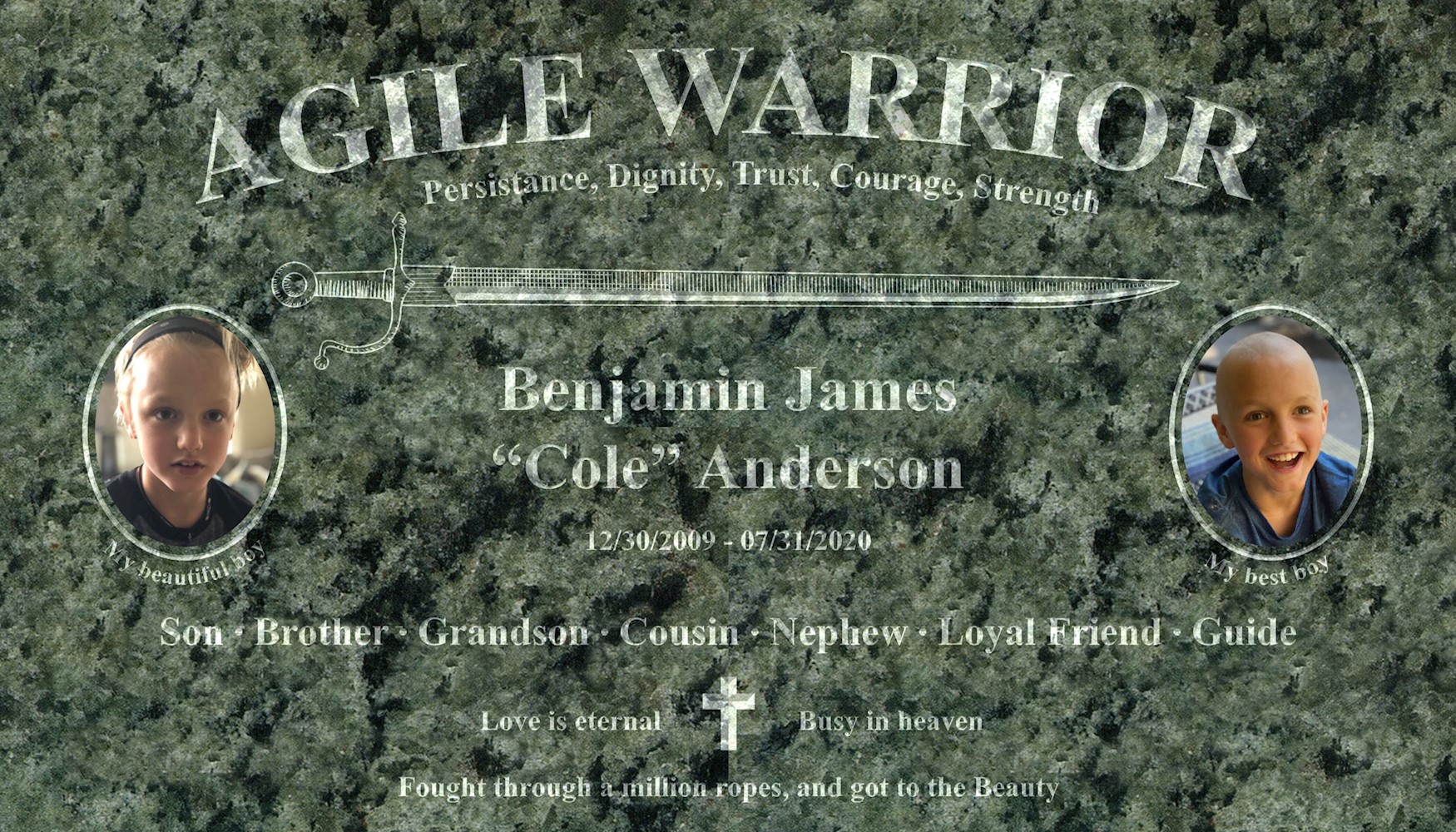 No matter how skeptical you might be about the New Testament claim that Christ rose from the dead, the gospels offer of reconciliation with God, a new and perfect Creation with a renewed and restored world devoid of pain, suffering, sadness, or fear is just too compelling to walk away from without at least looking into it.

In Christ’s resurrection, we’re confronted with something we find nowhere else – that Christianity is either both historically true and reasonable or else it is a waste of time.  And if it is true, how can it uniquely restore and renew our lives?

It seems fitting to be sharing this video of Ben’s (Cole’s) funeral during Easter.  After all, the key  element of Easter is Jesus conquering death and paving the way for believers to do the same, and thereby live forever in heaven and thereafter at some point on what will be known as the new earth.

Many of you could not come to Ben’s (Cole’s) funeral.  I wish you all could have been there! We are humbled to share a video production that we just received thanks to the work of Heyden Enochson.

Thank you, Chief Soto and the Reno Police Department

Thank you, Pastor Rod and Stacey

Ben chose the Batman Black Casket!  Not because he particularly cared about Batman, but because he thought Batman’s black color was so tough and enduring.  Ben also chose to be buried not cremated.  I could write more about this.  Ben was connected deeply to the realities and importance of a proper burial.

It all seems like yesterday to me.  Sorrow upon sorrow, upon sorrow, upon sorrow, continues to permeate my being, but I’m held up with the reality of eternity, the hope of love everlasting, and the promise of the resurrection.  Ben would ask, “Dad, why are you crying?”  “If Heaven is real, what is there to cry about?” He was right and my actions had to confirm this.  So I would say, “You are right, I’m sad because I will miss you, and as you know life is long, so to me it will seem like a long time before I get to be with you again, and that makes me sad.”

So many of us were inspired with how Ben (Cole) lived, so much bravery, courage, strength, confidence, and adventure.  Some comments from his website; “Through Ben we have all learned what it truly means to live”, “His example of living will give us all something to strive for everyday”, “I love how Ben knows no intimidation whatsoever”.  My hope is that so many of us would also be inspired by what Ben (Cole) believed, the faith he had, how he sought the truth, and how he handled suffering and passing with dignity.  He had to face his death daily, he had to figure it out.  His constitution, the very reality of his living large that all of us admired was because he knew he was a warrior that would live forever and there was nothing to fear.  Plenty to be frustrated and sad and angry about, but we had to live in the reality of resurrection daily and he needed to know it was real and that he was not going to “really” die.  This IS the best news in all the cosmos.

Via biblical scripture and the teachings of Jesus, Ben and I learned about eternity and it renewed our minds, changed our world view. Even better, it changed how we view the cosmos.  The Apostle Paul taught that death is an exception, it is wrong, it is not how things were intended to be.  Death is wrong and terrible.  I can attest to how terrible it is.  Thank God we spend most our time living and not dying.

Please email me if you have more questions about these Christian beliefs.  I would be honored to be a part of the conversations and questions.

Also, within the next couple of weeks his marker will be in place and we included a photograph of what it will say and what it looks like. There will be covers over the two pictures.

Please stay tuned for more updates.  We must do something special in his memory this summer!

Very important BTW:  Luke is doing great!  He has skied 18 different resorts this season so far with close to 60 days!  We are grateful for the time we’ve had together in the snow with each other and with our good friends.

Link to the funeral: Ben’s Ceremony