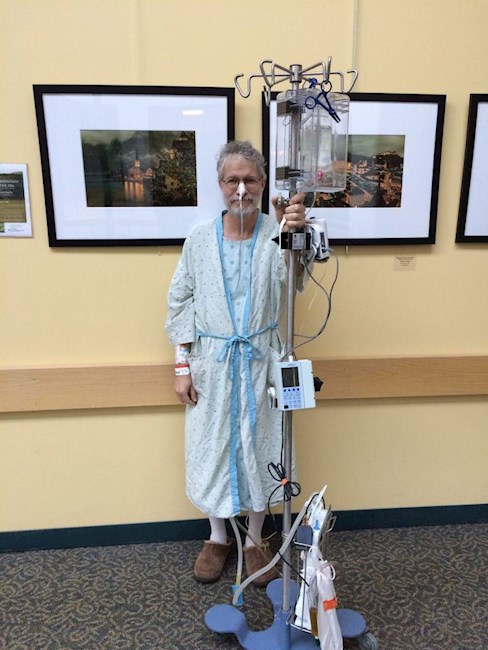 Monday and Tuesday were pretty frustrating, feeling like nothing was changing, but then things started happening:

1. Erik’s nasogastric tube was removed yesterday afternoon, which has made him much more comfortable, as its presence was causing his most troubling pain. That leaves 6 tubes (3 incoming, 3 outgoing); 4 of which will come out before we get to go home.

2. At the same time, they started reducing the level of pain relief his epidural was providing. That means he’s feeling more discomfort in his torso than before, that the epidural was masking, but it’s a necessary step toward going home, so Erik’s coping.

3. They have started the tube feeding again yesterday, at a very low level so far. They’ll ramp up the feeds today if there’s no chyle this time.

4. They took out his (19) staples this morning--slightly painful, but not too bad.

5. Erik finally gets to start having sips of water at noon today!

Meanwhile, Erik’s trying to walk as much as possible, which is more now than before. Mostly we’ve been doing circuits of the area with the patients’ rooms, but when he’s feeling up to it, we stroll down the “mall” at Dartmouth-Hitchcock, which resembles the atrium of a lovely hotel or conference center. They’ve made a big effort to have really nice artwork all over the hospital--one passes murals of 19th century Vermont life en route to Erik’s daily 5am xray (yeah, that’s *a.m.*), and we were enjoying seeing these great photos of Salzburg (where Erik’s parents lived for 4 years), and Hallstadt (where he and I visited and went hiking in 1985, when we were in Germany for his brother’s wedding) when Erik walked the length of the mall yesterday, prior to the NG tube removal.

This afternoon, we're looking forward to another visit from Cameron and my parents, and hoping for more to report soon!