Amazing that you are doing a documentary, Michelle! Of course you are the right person to do this. You have the science background and god knows you've got the patient experience. I've shared your video with all my friends on Facebook and donated. I can't wait to see the short, but in the meantime, I am *so* looking forward to hearing about your ongoing progress with whole plant cannabis. There is so much we need to earn about the endocannibinoid pathways in the body. And you will shed so much light on it for us. Sending you lots of gratitude and hugs from Oxford, Leslie xx

Tenacity is, and has always been, one of your admiral qualities. It is serving you well in this quest.
You ARE totally amazing

Hi Michelle, Your strength continues to amaze me. I plan to pass on the wonderful video clip to many who could use the support. It's going to be an amazing film! Much love to you and I hope to see you soon! Helena

Hi Michelle, Your strength of spirit in fighting this cancer is amazing. I wish there was something helpful that I could do for you. Sending prayers and positive thoughts to you and your family that you will soon be in remission again, and you'll be able to start your newest project. Sincerely, Elaine Hord

My dear my God Bless you always with all our love to your .

Hi Michelle! Thinking of you today and wishing you a restful and pleasant Memorial Day. Hugs, Maria

Dear Michelle,
So happy that you are home and on the mend.
We are sending healing thoughts your way, and our best to Bruce.
💐Cary and Liz

Thank you for this wonderful and excellent news!! ❤️❤️❤️From me and Chris

I’m so thrilled at the great news !!! Michelle you look so beautiful in that gown ! I m looking forward to visiting when you’re ready ! Bruce, you rock !

My heart dropped when I saw the first sentence of your post and then...such good news. I’m celebrating with you. Much love.

Great news Michelle. We are rejoicing your season of travel, adventure, reunion, and love. You have all our admiration. Best wishes on your next trip to Europe - we know you will make the most of it!! Love you ❤️ 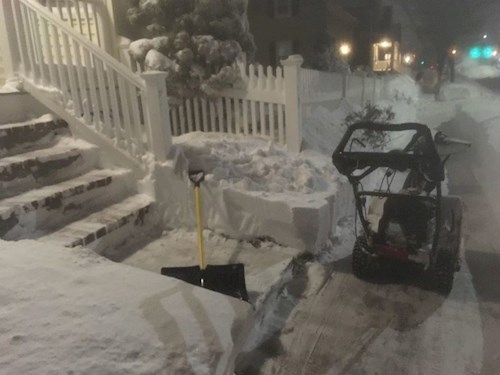 Thinking of you today.
I am taking this week off for some much needed R&R. So far all I've done today is turn on my laptop and brush my teeth. And it's almost 8pm. Ok that's not entirely true, but it's almost true. R&R it is! I've been loading up CDs onto my laptop--family singing Christmas Carols, my brother's jazz and blues... good stuff. My sister did a CD of all the chatter in between the caroling. What a treasure to have recordings of my favorite people goofing around!! I've been making plans of how I'll spend my week. I have a big long list of dreams. Something tells me I'll only get a fraction done, but at least I'll make some progress, huh. I'm trying to recover from a cold I got before Christmas that caused an asthma attack that's taking a while to settle down, partly because work has been so busy and I haven't been putting me first. So this week off is my attempt to be kind to myself. I hope it'll do the trick and I come back HEALTHY.

P.S. you wouldn't think this much snow could melt in a week, but that's what temps in the mid fifties and rain do for ya. luckily it didn't flood my basement

Well, you were probably dreading part II of the tooth saga, but here it is!

Despite our misgivings, we went to the preliminary exam with the expensive pediatric dentist 50 miles away. He had one of those amazing waiting rooms with computer games, Nintendo, a fish tank, a microscope, etc. At first Marisol wasn’t interested in cooperating with him, though he even spoke spanish, but then they opened wide. He too insisted that he had to pull the nice-looking tooth, not the grey tooth. Was it really that difficult to tell which side the abcess was on? Or did every dentist defer to the first so he wouldn’t look bad? Dentist code of honor? Or was he looking forward to the extra money he could make pulling the grey tooth in the near-distant future?

Along with all the electronic toys, the dentist also had lots of cheap plastic prizes. Marisol went home with 3 prizes: 2 dinosaurs (one for Lupe) and a pair of sunglasses. At dinner, Marisol insisted that going to the dentist was one of the highlights of their day. The other highlight was going to the store and picking a treat (a box of sugary cereal; better than candy cuz it has vitamins, or at least that is what i told myself). Afterwards, Marisol said we had to store the cereal with the candy cuz it has lots of sugar. Obviously my anti-sugar brainwashing was working well!

Then came the day we actually got the tooth pulled. I was dreading it because I had to give Marisol the tranquilizer without feeding them breakfast, and then had to drive an hour to get to dentist. I was sure I would hear lots of whining and complaining. So I gave Marisol gum (sugarless of course!) to take their mind off of any hunger pangs. It worked! The novelty of the gum was enough. Unfortunately, when we arrived we discovered that the dentist had been called away on an emergency. The wait was way too long and all the fancy toys did not interest Marisol. They were quite bored and kept looking out the window at the McDonalds down the block. In desperation, I finally promised that we would stop at McDonalds on the way home.

Once we finally got Marisol in the dentist chair there was another long wait as we waited for the novacaine to kick in and for the dentist to show up. The sedation was starting to wear off by the time the dentist showed up. I actually had to help the nurse hold down my child. (that is always such an awful experience. Yes, please, torture my child. I’ll even help! Oh goody.) Luckily, once the dentist got the instrument in Marisol’s mouth it took just a second or two. Interestingly, the tooth he pulled out looked PERFECT. Did that indicate a mistake? I didn’t have the presence of mind to ask.

Afterwards, they put Marisol in a wheelchair to take them out to the car. I thought it was a little over the top, but once we got to McDonalds (they had NOT forgotten; in fact, they insisted) I realized that Marisol could barely walk. They staggered around like a drunkard, with their feet rolling under. I tried not to let them go outside on the toys (they couldn’t walk, how could they climb on the toys!?) but again, Marisol insisted. They were mad at me and frustrated by their lack of physical control. There was lots of crying, and falling, as I stood by helplessly, holding an ice cream cone. It would have been hilarious if I hadn’t been so stressed (and embarrassed). I can’t imagine what the other mcdonald customers were thinking of us!

Months later, marisol suddenly and mysteriously had blood in their mouth. We finally figured out that it was their grey tooth, which was white again! (but also hollow) And then, to add insult to injury, a few months later they fell down again and this time they broke off their remaining front tooth. But they had to have surgery to remove the root, which looked pretty ugly and eroded. (unlike the beautiful root on the first front tooth that was removed). So once again, I asked myself, did they take out the wrong tooth initially?! Did I contribute to someone’s boat payments?

Thank goodness their permanent teeth grew in beautiful and straight and are still in Marisol’s mouth!

I hope things are as good as they can be,
cheers,
annie