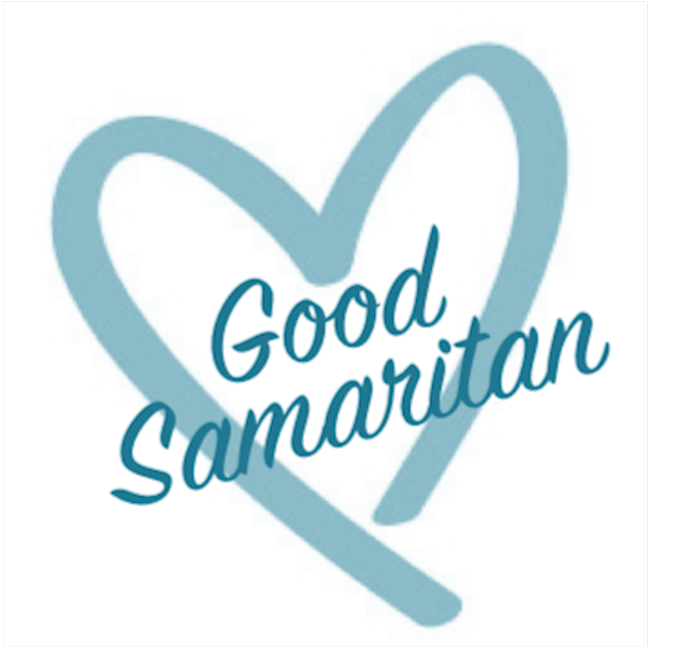 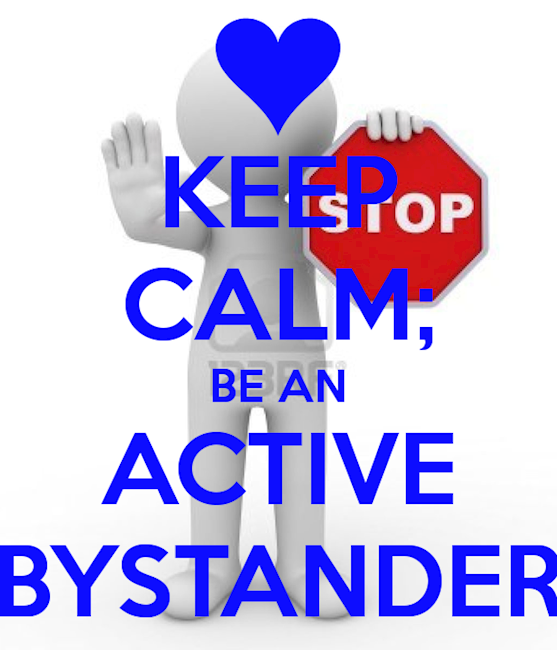 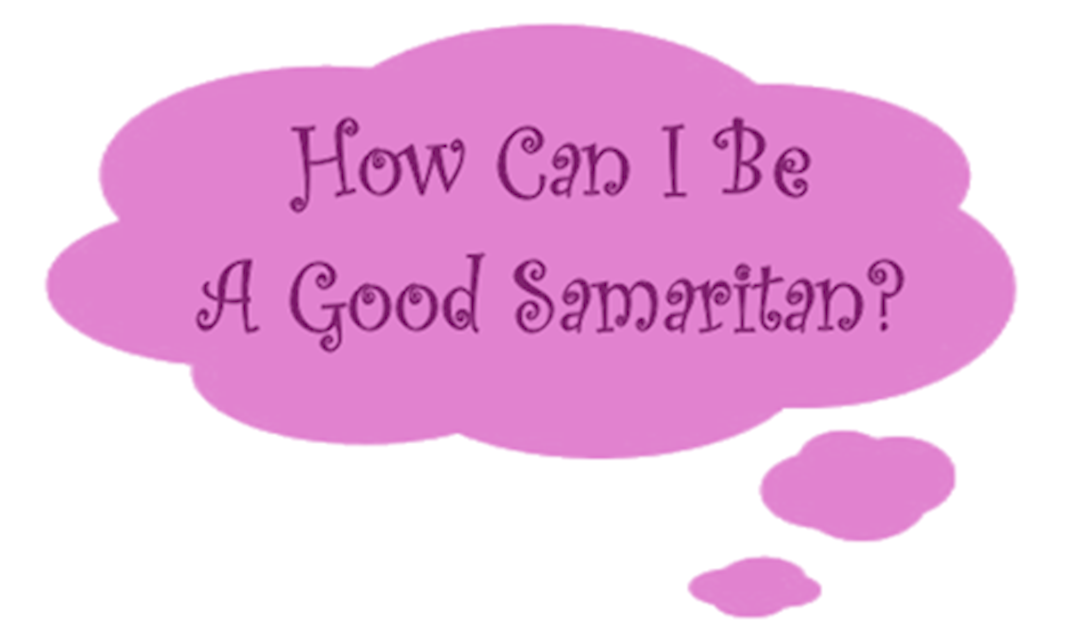 What is a good Samaritan?

“Good Samaritans” are persons who go out of their way to perform acts of kindness to others, especially strangers; people who give reasonable assistance to those who are, or who they believe to be,  injured, ill, in peril, or otherwise incapacitated.

What is an Active Bystander?

An active bystander is someone who not only witnesses a situation, but takes steps to speak up or step in

to keep a situation from escalating or to disrupt a problematic situation.

Some simple steps to becoming an Active Bystander:

• Notice the situation: Be aware of your surroundings.

• Interpret it as a problem: Do I recognize that someone needs help?

• Feel responsible to act: See yourself as being part of the solution to help.

• Know what to do: Educate yourself on what to do.

• Intervene safely: Take action but be sure to keep yourself safe.

I originally was told that a woman and her friend witnessed the accident, saw me ejected from the vehicle, saw a little boy standing by me and crying while I was laying face down in the snow on the road and  they said that noone else was around and noone was stopping at the scene.  They said that they just watched and then left and didn't even call 9-1-1.  This was always so bizarre to me.  Who watches all that and then leaves a 5 year old child on a snowy busy road.?  It never made sense.  It still doesn't.  I thought how horrible he was alone that whole time and noone even stopped - not even the people who watched it happen apparently. My faith in humanity waivered.

Fast forward 20 months.  I discover news articles and a video I didn't know existed about our wreck; this led me to come into contact with a lovely lady who just happened to be the second person on the scene of my wreck per her testimony to us.  The miraculous thing is that she was a retired Emergency Room/Trauma Nurse of 22 years.  She used to work at the same hospital I would eventually be taken to.  She even knew some of the EMS/Paramedics who came on scene.  Her name was Becki and her story was amazing.

Becki stated that her daughter and her were heading to a pet store that Saturday to adopt a dog. It was a busy day for her.  It was an odd morning as she put on her snow boots and her winter coat and she wasn't sure why...she just did.  Apparently she always just carried them in the car with her, but this day she did things differently and wore them both while she drove.

They were driving along, her and her daughter (her daughter was about 19 at the time - I hope I got that correct on her age).  All of a sudden up ahead there were vehicles swerving in many directions.  She then recounts seeing a body laying in the road face down (mine).  She felt compelled to stop and help as noone had stopped yet.  Her daughter didn't want her to stop, but she did...stop that is.  She said she was the second person on the scene at that point.  The first was a tall man in a red pick up truck who would be the one who called 9-1-1 while she tended to me.  She said that I was face down about 10-15 feet from the van.  She was with me and I was unresponsive.  She asked me questions and all I was doing was moaning.  She said she kept telling me to lay still and kept telling me to don't move.  She said that she heard a sound of a door opening and she looked up and a little child came out of the passenger side of the sliding door of the van he had opened, and came over towards me.  This was Austin.  Becki said he was calling "mommy mommy get up over and over".  She said he was hysterical and crying.  She recounted that she thought I must have heard him as I tried pushing myself up over and over and kept trying to get on my hands and knees but I couldn't raise myself up properly and kept falling back down.  She said she encouraged me over and over to just stay still.  (Note: I had a shattered R scapula, all ribs on R side broken, back T5-10 broken, pelvic fracture, wrist fracture, head injury, and other stuff)

Becki said that the tall man and my little Austin were asking her to turn me over on my back.  She nicely refused and explained I had to remain there due to possible injuries.  She said many people had stopped and were throwing blankets out of their vehicles towards her to cover me up.  She said there was a large amount of blood around my head and I was continuing to bleed.  I was barefoot (I explained to her my shoes apparently got left in the van on the break pedal that got bent according to the Officer).  She said I never was able to answer with words.  She said I remained largely unresponsive and she just felt it was very important not to move me.  She said I was covered to keep me as warm as possible and she just kept talking to me ting to keep me still and calm.  She said a woman with short curly hair had put her arm around my Austin and so she just assumed she was also in the wreck and that he went with her.  She said that traffic was swerving around us and that there was no emergency vehicles until later.  She said the fire department arrived first.  Then the police, and then the ambulance.

Becki stated that there was another woman there as well who was an off duty Home Health Nurse who was helping us.  She said she left that Nurse with me and she went to check on the other driver who was trapped in her car still.  She ended up helping the other driver named Greta who was in her 50's and was complaining of leg pain.  Becki ended up leaning over Greta on top of a fireman's jacket so they could break the windshield and use the jaws of life to get Greta out.  She said Greta was conscious and didn't want her son called until she knew if she was hurt or not.  Becki knew the Fireman and the Paramedic on the scene.  She said she was back and forth between myself and Greta.  She doesn't remember the Home Health Nurse's name (though I would love to know it and meet her).

Becki was unaware where Austin had  gone.  I told her about Mr. and Mrs. Lambert and how he was an off duty volunteer in the heart center at a local hospital we were both familiar with.  I explained how they apparently took Austin in their vehicle to keep him warm and safe.  I explained how Mr. Lambert visited me at the hospital when I was admitted and how I had spoken to him a couple times over the phone since then.  I told her how they kept him until the police arrived and how the ambulance did not even know that a child was involved as that was never relayed to them by anyone.

We talked about the alleged witness' testimony and how they left the scene and then allegedly came back to speak to the officers later.  She said all of that was untrue and a lie (what they said) because she personally was there when Austin got out of the van and there were LOTS of people who stopped. I told her that restored my faith in humanity a little bit - that a child wasn't just left  standing there. She restated that the tall man was the first person on the scene (someone else I'd like to meet). Ironically, her story matched the story Austin has told since the wreck. What a good little memory he had bless his heart.

There were lots of unknown active and nonactive bystanders that day.

I want to honor the folks that assisted with blankets. Thank you to Mr. and Mrs. Lambert, the Home Health Nurse whose name I don't know; the tall man who called 9-1-1; the police who kept Austin safe after the Good Samaritans took control of the situtation and the scene; the Fire Department, AMR the ambulance crew that day, and a super special thanks to Becki's daughter (your mom quite possibly saved my life by NOT moving me), the videographer who filmed the later part of the extrication and cleanup process of wreck and posted it on utube - it was this that led me to these Good Samaritans.  I want to thank all the other folks I may still not know about who helped out or were a part of that whole process to help out myself, Austin , and Greta.  All of our lives will be changed forever - including yours.

You are the unsung heroes here and my appreciation and sincerity of thought can not begin to be put into words for all your selflessness that day.  Becki said it was horribly cold, windy, and snowy.  However, it would seem that in the midst of all that cold - the warmth of your hearts and hands to help complete strangers stood out........ and though neither Greta nor I can remember the wreck at all - after speaking with Greta as well about all this - I can say with certainty - that we are both very grateful.

I have one message.  If you see a wreck....stop!  Just because others are stopped doesn't mean they are doing anything to help. You don't have to be specially trained to make a difference.  Please call 9-1-1 even if you cannot stop.  Report all wrecks.  Quick reporting = quick repsponse = best chance in that "golden hour" of time to save someone. Talk to the patient's even if they don't respond. Don't move them unless absolutely necessary.  Please let Emergency workers know if a child is involved.

To EMS and Fire, you did an Excellent job on C-spine as I did not end up paralyzed - even with all my injuries.  Also EMS and Fire -  if there is a wreck with a carseat look for a child....especially if accompanied by an ejection, please look for or ask around about any possible children on the scene.  Law Enforcement, please make sure any children you are keeping safe in your car(s) are checked out by EMS Personnel or transported to a hospital as "walking wounded" until proven otherwise.  None of this happened with Austin.

Overall though....good job folks.  All accident victims are now SURVIVORS...thanks to all of you!